Rafael Campos conjured up memories of Chi Chi Rodriguez when he shrugged off strong afternoon winds to take the first-round lead in his hometown tournament at the Puerto Rico Open on Thursday.

San Juan-born Campos adopted a largely conservative strategy, but still managed to accrue four successive birdies around the turn on his way to a bogey-free, eight-under 64 on the Coco Beach course on the Caribbean island.

Campos is the first Puerto Rican to lead a PGA Tour event since Rodriguez won the 1979 Tallahassee Open, his eighth and final PGA Tour victory.

The 27-year-old Campos leads American George McNeill by one stroke, with defending champion Alex Cejka of Germany among a group two behind.

Campos, who plies his trade primarily on the secondary Buy.Com circuit, was buoyed by a gallery of family and friends that cheered every birdie.

"I had a great crowd, which kind of helped me ease my way into the round," he told PGA Tour Radio.

"It was kind of easy. I hit the ball very well today, kept the ball in play, which was my main goal, hit a lot of greens.

"I know it was windy and all that but I played really safe the holes I had to play safe (and) rolled a few (putts) in."

Campos, who has played in the event every year since its inception in 2008, added that he would keep his mobile phone switched off the rest of the day, to avoid distraction.

"I really don't want to have more pressure than I already have," he said.

"Whenever I turn it on I know I'll have probably 100-200 messages. I'm thankful for everyone who came out here. I want to perform good in front of the home crowd." 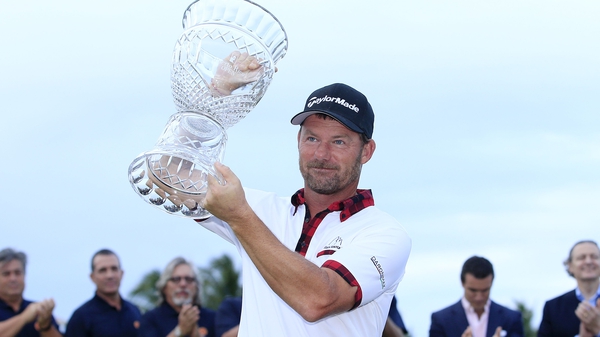