Sweden's Alex Noren will take a two-shot lead into the final round of the Nordea Masters as home players filled six of the top eight places in Malmo.

Noren defied winds gusting up to 30mph to card a superb third round of 67 at PGA Sweden National and finish 11 under par, with Germany's Max Kieffer his nearest challenger after three birdies in the last five holes in his 70.

Denmark's Soren Kjeldsen, who ended a six-year winless drought with victory in the Irish Open on Sunday, split the home contingent on seven under after a 68.

Peter Lawrie slipped down the field after a four-over-par 76 left him level overall.

Michael Hoey also shot 76 and is two over while Gareth Maybin's 77 drops him to four over.

Teenage amateur Marcus Kinhult, who had shared the overnight lead with Dantorp, fell eight shots off the pace after a 77 which included double bogeys on the 15th and 17th.

Noren, who played just two events in 2014 due to tendonitis in both wrists, has won three times on the European Tour, his last win coming in this event in 2011.

"I knew I would play again but I didn't know when," said the 32-year-old from Stockholm, who finished second in the Dubai Desert Classic in February and was eighth in the BMW PGA Championship at Wentworth a fortnight ago.

"This year has been fantastic with a few good finishes and steadier play. I'm really trying to work on hitting the right shot at the right times and a day like today was a good test.

"Maybe before I was little more one-dimensional in my game, just hitting a fade, but now I am trying to hit it both ways and it's working a little bit better.

"I'm very happy to play the way I did today, especially my putting. It would be great to win this event again but there's still another 18 holes to play."

Kjeldsen relished the same windy conditions which prevailed at Royal County Down last week, the 40-year-old carding six birdies and two bogeys to surge through the field.

"I was very determined to play well this week," he said. "I didn't see any reason why I shouldn't. The game felt good and mentally I was ready to play again.

"I was a bit tired for a few holes on Thursday and the last two on Friday, but I decided not to practice after my round yesterday, which is pretty unusual for me. I think that was the right move and I felt good today.

"It's seriously windy again but this is what I grew up in. I love playing in this, I can shape my shots and hit it relatively low and use my short game so it's been good conditions for me."

Stenson has yet to win a European Tour title on home soil but gave himself a fighting chance with a 68 which contained an eagle, four birdies and two bogeys.

"I'm happy with the score," the Ryder Cup star said. "We're still going to be a way back (tomorrow), but at least we have a chance. It was a bad momentum killer to three-putt the 17th but I got it back on the 18th and this wind is going to thin out the number of guys at the top." 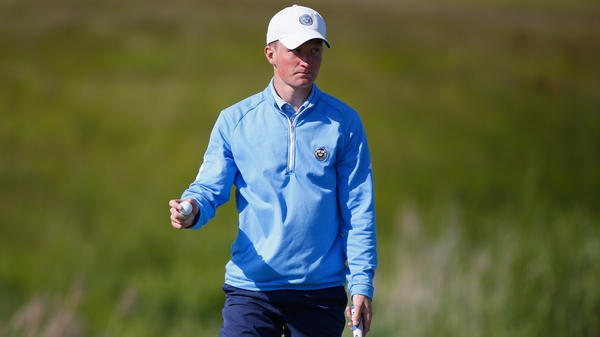