World number four Henrik Stenson made a solid start to his bid for a first European Tour title on home soil, but found himself upstaged by compatriot Marcus Kinhult, an 18-year-old amateur ranked 1,273rd.

Stenson carded an opening 70 in the Nordea Masters at PGA Sweden National to lie three shots behind Kinhult and fellow Swede Jens Dantorp, as well as England's Chris Paisley.

Peter Lawrie is best placed of the Irish, tied in 13th place, two shots behind the leaders on three under. Gareth Maybin is next on level par, with Michael Hoey two over, Kevin Phelan four over and Damien McGrane six over.

"I did not expect much, just to have a great week and gain some experience. That's what I'm here for. So far so good" - Marcus Kinhult

"It's pretty special to play in a European Tour event and to be playing here in Sweden," said Kinhult, who was one over par after eight holes but birdied six of his remaining 10 to join Dantorp and Paisley on five under par.

"It was (down to) brilliant putting. It was solid from tee to green and I made a lot of putts, for birdie and par.

"The putter was pretty hot on the back nine."

Kinhult won the prestigious Lytham Trophy by eight shots at the start of May but added on European Tour Radio: "I did not expect much, just to have a great week and gain some experience. That's what I'm here for. So far so good. I hope I can keep this up and make a lot of birdies."

Dantorp usually plays on the Challenge Tour and was second in his last event a fortnight ago, but also shared the lead after the first round in his home city 12 month ago before fading to finish 57th.

"I putted really well today, which was the key to my score," he said. "There are a couple of things I need to improve with my shots, but my putting made up for it. I know the course really well, so actually in practice I only played four holes because of the wind and rain.

"It's great to play with such good support. Normally you're travelling to other countries to play, but here it's nice to have lots of people cheering you on. Last year I played well here so I have confidence from that."

"We seem to have had a lot of wind the last few weeks and it was more of the same today," Slattery said. "After last week it felt a bit easier, but four under is still a good score.

"We can't get out of the waterproofs; the last few weeks have been really tricky and certainly will have toughened us up for the next stretch of events. It's so easy to under-club here as there's nothing to stop the wind. You can't flight it under the wind, so if it's two clubs up you just have to trust it and get on with it.

"It was nice to hit a lot of good shots today and I putted a bit better. It's a good start."

South African Hennie Otto was a shot further back on three under in his fifth event since undergoing a third back operation in less than a year.

"Yesterday I started hitting a few good shots again and got a feel for it so hopefully it will stay there," said Otto, who underwent two operations last summer before winning the Italian Open in August and missed three months of this season after more surgery in February.

"It's tough and you never know what is going to happen. At this moment it feels good. I have been hitting a lot of balls the last few weeks so it's so far, so good again." 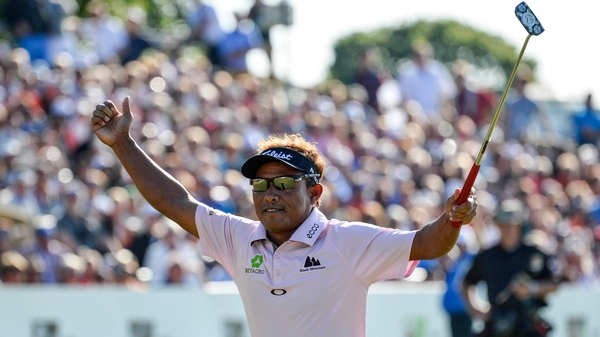