Rory McIlroy is happy to embrace the favourite tag as he attempts to land a career grand slam at the US Masters this week.

Speaking exclusively to RTÉ Sport's Greg Allen, the world number one revealed he spent time at the Augusta National course in recent weeks to prepare for the tournament and ensure he was ready for the challenge.

“I’m really happy to be here. It’s always a thrill to get back to Augusta National,” he said.

“I’m really just ready for the gun to go on Thursday morning. I’ve done a lot of great preparation and a lot of good practice over the last couple of weeks. I came up here and took another look at the course, which no-one really knows about till now.

“It’s been good and I feel I’ve done all I can to prepare. Now it’s just about going out there and executing it and trying to stick with the game plan.”

McIlroy, who led the Masters going into the final round in 2011 only to shoot an 80 and finish ten strokes behind winner Charl Schwartzel, said the key to winning this year and improving on his previous performances is to capitalise on the par fives.

“If I have one goal this week it’s just to play the par fives better than I have done in the past. I know if I can do that then it will give me a much better chance to win the tournament,” said the 25-year-old.

McIlroy concedes that mentally winning the Masters and the slam cannot be separated this time round in Augusta - though they probably should - but it’s a pressure the Down native is willing to embrace.

“I think this week they go hand in hand. I think every Masters until I win one will be the same thing because it’s a great opportunity to do both.

“But I have to treat this like it’s the Masters. I can’t treat it like I’m going for something special.

“Even winning a Masters is unbelievably special. Winning this event is huge but they sort of go hand in hand. I know winning one, it means the other.

“That’s the way it is and that’s my own doing, which is a great thing and great position to be in.

“I don’t mind handling those thoughts and handling the little bit of added pressure and attention that I get from obviously winning Augusta and winning a career grand slam as well.”

The pressure will be off for today though, with some light-hearted competition on the cards, as McIlroy gets into the swing of things with One Direction’s Niall Horan on his bag in the Masters Par Three competition. 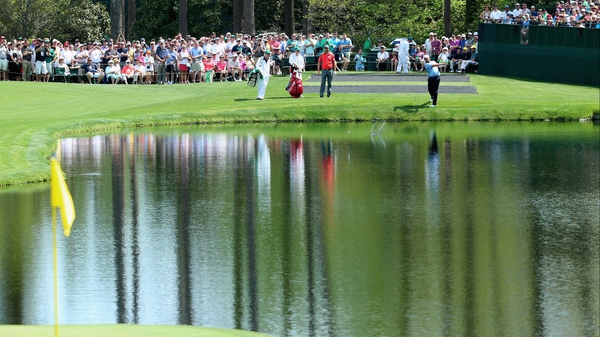 Rory McIlroy paired with Phil Mickelson at the Masters Golf