There was heartache for Damien McGrane despite an impressive final round at the Russian Open after he lost out to England's David Horsey in a play-off.

McGrane looked set to beat Scott Jamieson, who finished 12 under for the tournament, by two strokes, yet he bogeyed the 18th as Horsey found a birdie and an eagle in his last four holes, so that both ended on 13 under.

Only one play-off hole was needed. McGrane found the greenside bunker on 18 before missing his putt from 10 feet, and Horsey duly wrapped up his third European Tour win by two-putting for the win.

Kevin Phelan was next best of the Irish, finishing tied 33rd on two under after a final round of 73. Simon Thornton was four strokes further back after a final-round

Horsey, who carded 72 on Sunday, admitted he thought he had let the prize money slip through his fingers before realising he could still triumph before nailing an eagle on the par-five 17th.

The 29-year-old from Alderley Edge shared the overnight lead with Peter Whiteford heading into the final round at the Tseleevo Golf and Polo Club in Moscow, but both men tumbled out of the top spots while McGrane was cutting through the pack with seven birdies.

After winning his first trophy since 2011, Horsey told Sky Sports 4: "Relieved is the word that sums it up.

"I had a bit of a mare on a couple of holes over the back nine and didn't really know where I was in the tournament until 17.

"I suddenly realised I was only three behind but needed to do something drastic quite quickly. I managed to chip in and, while I was trying to make birdie at the last, I didn't realise he'd dropped one.

"I got up and down to get in the play-off and I was fortunate to win that." 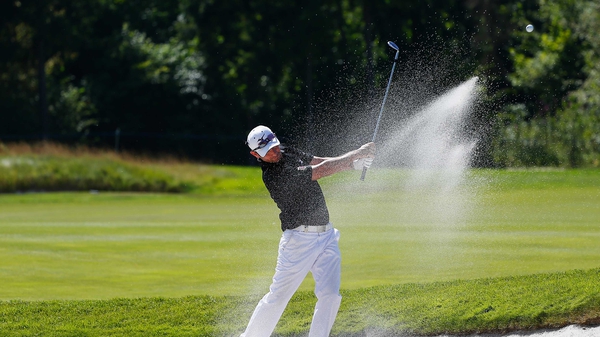