Jim Furyk will take a three-shot lead into Sunday's final round as he bids to win the Canadian Open for a third time, but Graeme McDowell dropped back to a share of ninth spot.

The American veteran followed up Friday's course record-equalling 63 with a 65 in his third round and is on 15 under, having not dropped a shot since the fourth hole of his opening 67.

South African Tim Clark is second on 12 under after a 64 to follow up back-to-back 67s.

Graeme McDowell, who went into the third day tied for fifth, shot a 70 to drop to a tie of ninth position on seven under, eight strokes behind Furyk.

Furyk, champion in 2006 and 2007, made birdie at the third after a superb approach and added another at the next as he nicely judged the pace of a downhill putt from 23 feet.

His 150-yard approach to the ninth spun right to left and looked set to drop in for an eagle but he settled for a tap-in, a third birdie and an outward nine of 32.

He also birdied the par-five 12th and added another when his approach at the 14th just cleared the water and clung on to the edge of the green, and the nine-foot putt teetered for a split second before dropping.

A par save after careering through the back of 16 was just as important and he also recovered from a wayward tee shot at the last to get up and down from in front of the green.

Clark burst into action with a birdie-eagle start, pitching in from 50 yards at the par-four second.

He added three back-nine birdies on an unblemished card, going within a foot of a hole in one at the 205-yard 13th hole after his tee shot bounced favourably out of the rough just short of the green.

Kyle Stanley was on 10 under after a 68, a 24-foot birdie putt at the 15th providing a flourish on a round containing four previous birdies but three bogeys.

Third outright, Stanley will play in the final group on Sunday after the threat of thunderstorms led the PGA Tour to implement an early start, from both the first and 10th tees and in three-balls - similar to the measures taken at the third round of last week's Open Championship at Royal Liverpool.

Jamie Lovemark was fourth on nine under after a tidy 67 while Furyk's fellow overnight leader Tim Petrovic and Canadian Graham DeLaet - who partnered Furyk on Friday and matched his low round - were both eight under along with Scott Brown and Joe Durant.

McDowell and Spaniard Gonzalo Fernandez-Castano were the leading Europeans, Matt Kuchar was a further shot back and defending champion Brandt Snedeker was at five under in a sizeable group also containing South Africa's two-time US Open champion Retief Goosen. 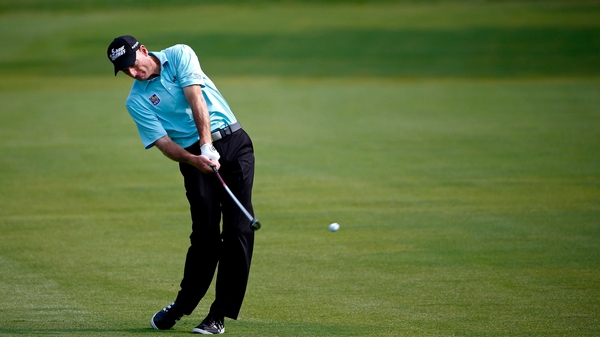