Jim Furyk moved into a share of the halfway lead at the RBC Canadian Open after he and playing partner Graham DeLaet both equalled Royal Montreal's course record.

The pair each carded 63, seven under par around the Blue Course, which saw Furyk move alongside Tim Petrovic on 10 under at the top of the leaderboard.

Petrovic, who also shared the first-round lead with Michael Putnam, carded a four-under 66 and has had only one bogey through his first two rounds.

Furyk, the 2006 and 2007 champion in this event, started from the 10th and after an opening par, kick-started his group's blistering scoring with four straight birdies.

He gained further shots at the first, sixth and eighth in a blemish-free round.

Home favourite DeLaet, who lies two shots off the lead in third, could not say the same after bogeying the 18th and fourth but recorded nine birdies in a superb round.

The third member of the group, Matt Kuchar, was only two shots outside his playing partners' pace with a 65 to reach six under and a share of ninth place.

Graeme McDowell was tied fifth on seven under par after a second round of 65.

Furyk, though, was the star of round two.

DeLaet added: "All of us were making so many birdies out there. You felt like you had to make putts just to keep up."

Kyle Stanley was alongside DeLaet on eight under, and McDowell joined on seven under by Americans Justin Hicks, Scott Brown and Andrew Svoboda.

"I was giving 'Kuch' a bunch of crap for being the schlub in the group, shooting a 65" - Jim Furyk

Dustin Johnson was a notable name to miss the cut, a second-round 68 not enough to make up for his opening 74, while Hunter Mahan toppled out of the tournament with a 75 featuring seven bogeys.

Luke Donald and Trevor Immelman also failed to secure their places for the weekend. 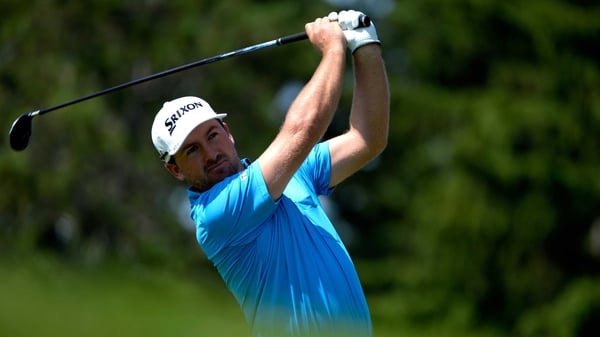