Graeme McDowell was four shots back as Tim Petrovic and Michael Putnam shared the lead after round one of the RBC Canadian Open.

McDowell finished on two-under after a 68.

The 23-year-old had earlier rolled in a 29-foot birdie putt on the par-three 13th and was inches away from holing an even longer effort at the 17th as the shorter holes served him well.

Petrovic carded three successive birdies from the second and added another on the seventh hole, before an eagle at the par-five 12th shone out amid a back nine otherwise featuring only pars.

Putnam also signed for a bogey-free 64 featuring birdies at the 12th and 17th as he started on the back nine, and the second, third, fifth and eighth after the turn.

Stanley started at the 10th and made five birdies in his opening nine holes. He shed a shot at the third hole but recovered it at the sixth to end the day within one of the lead.

Notable names among the large group at four under included Charl Schwartzel, Robert Allenby, Charlie Wi and Nick Watney, while American Bo van Pelt birdied his last four holes - and six of his last eight - to join them.

Jim Furyk and Spaniard Gonzalo Fernandez-Castano were among those a further shot back, with McDowell two under along with the likes of Stewart Cink and Hunter Mahan.

McDowell's round featured one of the day's highlights, an eagle two at the 11th after he holed his approach shot from 213 yards.

England's Luke Donald and Scotland's Martin Laird were one over but perennial major championship contender Dustin Johnson stumbled to a four-over 74 featuring only two birdies, four bogeys and a double at the par-four 14th 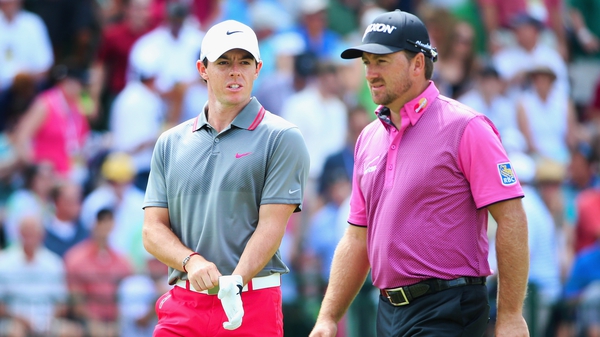