Graeme McDowell was full of admiration for Rory McIlroy's British Open victory on Sunday, but does not believe his fellow Northern Irishman can go on to dominate the game.

McIlroy's two shot-win over Sergio Garcia and Rickie Fowler at Royal Liverpool made him just the third player after Tiger Woods and Jack Nicklaus to have won three majors by the age of 25.

However, McDowell feels the talented new generation in the game will make it impossible for McIlroy to match Woods at his prime, the former world number one winning seven of his 14 major titles between August 1999 and June 2002.

"I don't think we'll ever see the dominance of Tiger Woods in the late '90s, early 2000s. I don't think we're ever going to see that again," said McDowell who proved his own point as one of 15 different winners of the 16 majors played between 2009 and 2012.

"For every Rory there's an Adam Scott and Jordan Spieth and Sergio Garcia and a Tiger and a Phil (Mickelson). There's too many good players now. It's so deep. It's so strong. Everyone is so good.

"I don't think we're going to see that dominance again for a while unless somebody comes out who has perfected the imperfectable.

"I think these guys, the best players in the world, are playing pretty close to as good as you can play, really. This game is hard.

"You can't play much better than Rory is hitting the ball. That's as good as it gets. Unfortunately you can't hole every putt, or else you'd be shooting 58 every day. It's just not happening."

Phil Mickelson, who McIlroy succeeded as Open champion, agreed with McDowell's assessment, adding: "We used to say there will never be another Nicklaus, and then along came Tiger.

"It's very hard to do that week in and week out the way Tiger did. That's why it was so impressive what he did." - Phil Mickelson

"You never want to discount the possibility of someone coming along and dominating. But nobody has really asserted themselves week in and week out the way Tiger did for such a long period of time.

"We'll have great performances, like Rory this week. Like (Martin) Kaymer at the US Open and so forth. But it's very hard to do that week in and week out the way Tiger did. That's why it was so impressive what he did."

McIlroy's previous two major wins had both been by eight shots, but McDowell feels his Ryder Cup team-mate could benefit from having to work hard to hold off Garcia's challenge on the final day at Hoylake.

"I think he's learning all the time," added McDowell, who finished joint ninth. "Rory gets it done from the fairway, 370 yards down the middle of it. It's easy to get it done from there. I say it's easy, I'd like to have a go at it.

"Tiger had that capability of getting it done ugly. Perhaps Rory has to prove that he's got that side to him." 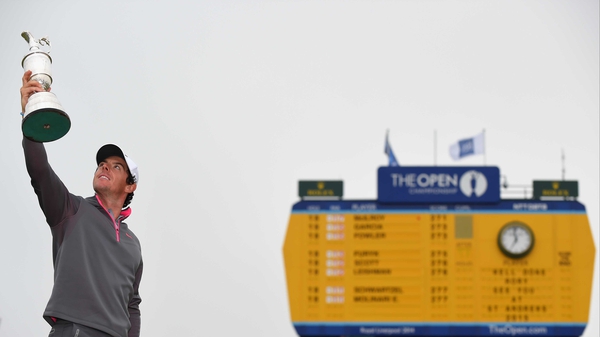