American Kevin Stadler remains on course for a wire-to-wire victory in the Alstom Open de France after a testing third round in which just three players broke 70.

Stadler held a one-shot lead after a flawless opening 64 and extended his advantage to three shots thanks to a second round of 68, despite suffering a dreaded shank on his way to a double-bogey seven on his final hole.

And although the world number 62 could only manage a one-over-par 72 on Saturday, the wet and windy conditions meant he finished the day four ahead of France's Victor Riu and Thailand's Thongchai Jaidee.

Jaidee's 69 would have been even better if not for a bogey on the 18th, while US Open champion Martin Kaymer is six off the lead after a 70.

Damien McGrane, Michael Hoey and defending champion Graeme McDowell were best placed of the Irish on one under after third rounds of 72, 73 and 73, respectively.

Stadler carded one bogey and eight pars on the front nine and that allowed Riu to claim a share of the lead when he recorded his second birdie of the day on the ninth.

At that point the 29-year-old from Paris was the only player in the field not to have dropped a shot, but a bogey promptly arrived on the 10th after he drove into the water. Stadler holed from 10 feet for birdie for a two-shot swing.

Riu bounced straight back with a birdie on the 11th but then carded five bogeys and a birdie in the next six holes, managing his only par of the back nine on the 18th.

Stadler was far more consistent with seven pars and a bogey on the 17th, despite struggling with a back injury which flared up during the round.

"It's a little tight," Stadler said. "It's been a little out of whack all week. Luckily didn't give me a whole lot of trouble the first couple of days, but it today it turned up a bit. I'm still able to swing so should be fine.

"I got about what I deserved out of my game today. I didn't play that great, made a whole lot of pars and did not have nearly as many looks [for birdie] as I had the last couple days, but you can't expect to play that well for four days in a row.

"I knew I really didn't have to do anything crazy today. A couple less would have been nice, but overall I'm happy the way it went." 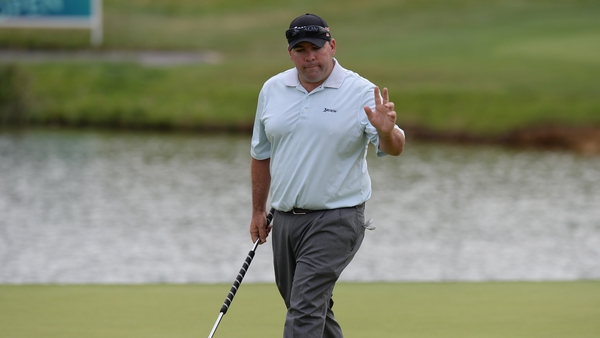