American Kevin Stadler celebrated Independence Day by setting the clubhouse target in the Alstom Open de France, but was left to rue an ugly finish to his round.

Stadler carded a flawless opening 64 at Le Golf National and did not drop his first shot of the tournament until his 32nd hole at the 2018 Ryder Cup venue.

But after bouncing back in style with birdies on the next two holes, the world number 62 shanked his approach to the par-five ninth - his final hole - to run up a double-bogey seven.

"I just tried to get a little too much out of it," admitted Stadler, who had to settle for a round of 68 and a ten-under par total.

"I didn't have the best of lies and had to hit the shot perfectly. I got a little too steep on it and it came off the hosel and into the deep stuff.

"It was not exactly how I planned to finish the day, but overall it was another good day so it's all good.

"I putted brilliantly the first couple of days. I got a little sloppy on my final nine today, but other than that struck the ball very well as well, had a lot of chances and rolled in a lot of nice putts."

Stadler won his maiden PGA Tour title in February and was half of the first father-son pairing to play in the same Masters in April with his father Craig, the 1982 champion.

The 34-year-old finished joint eighth at Augusta but that has been his only top ten since winning in Phoenix.

"Hopefully I can do more of the same at the weekend, the putter keeps co-operating and I am looking forward to the last couple of days."

At ten-under-par, Stadler held a three-shot clubhouse lead over France's Victor Riu, whose only bogey in a round of 67 came on the 18th.

Defending champion Graeme McDowell added a 69 to his opening 70 to finish three-under-par and was quick to acknowledge Stadler's superb performance.

"I said to (US Open champion) Martin Kaymer it was nearly as good as his at Pinehurst, but not quite," said McDowell, whose winning total 12 months ago was nine-under.

"It's a great display of golf. It's Kevin's type of golf course and if he keeps playing like that he's going to be tough to catch, but I feel like three-under is not a bad return for the last two days and if I can go low tomorrow and get myself back into it, who knows?"

Playing partner Kaymer, who won his second major title by eight shots last month, was a shot behind McDowell on two-under after carding a 68 containing six birdies and three bogeys.

Michael Hoey is level with McDowell on three-under after a five-under 66, which included seven birdies and two bogeys.

Three-time major winner Pádraig Harrington will not be around for the weekend after he carded a second-round 73 to go with yesterday's 74, which left him on five-over.

Simon Thornton and David Higgins will also miss the cut, as they are on nine-over and 13-over respectively.

Damien McGrane, Gareth Maybin, Peter Lawrie and Kevin Phelan are still out on the course. 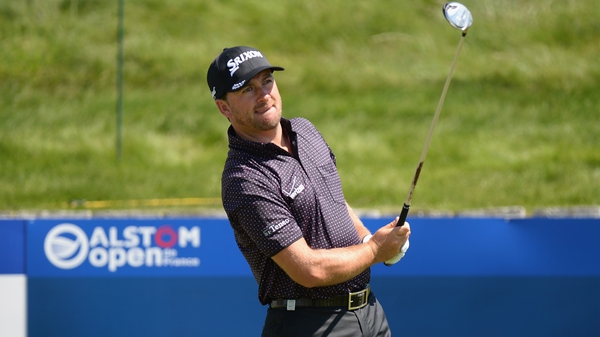