Unheralded Frenchman Alexander Levy thrust himself into the spotlight with a 10-under-par 62 - the lowest score of his career - in the second round of the Volvo China Open.

The world number 282, in his second season on the European Tour, raced into a four-shot lead after posting the course record at the Genzon Golf Club in Shenzhen with some blistering scoring.

Michael Hoey shares 20th spot after adding a par 72 to his opening-round 69.

A five-over 77 cost Lowry his place in the weekend and a 71 wasn't enough for Maybin who finished on five over.

McGrane's 74 left him three over and although Lawrie carded a creditable 70, it couldn't cancel out his horror opening 78.

Levy, who has had only two top-10 finishes in 34 previous events, carded eight birdies and an eagle in a blemish-free round which catapulted him into contention.

Levy began the day with a par at the par-four 18th to complete an opening round of 68 which was curtailed by bad light on Thursday.

But he was quickly into his stride for round two and a 25-foot eagle putt at the ninth capped an outward half of 30 which included four birdies.

World number 303 Adrian Otaegui is one stroke behind after a 66, fellow Spaniard Alvaro Quiros third on nine under after a 68 and Levy's friend and compatriot Raphael Jacquelin one back following a 67.

England's Ian Poulter looked to be mounting a challenge to the leader as he reached the 12th at six under for the tournament but then had a mini-meltdown which means he was almost not around for the weekend.

A double bogey at the 205-yard par three was bad but worse was to follow at the next with a triple-bogey eight after an incorrect drop cost him two shots.

That left the Ryder Cup winner nearer the cut mark than the top of the leaderboard and another dropped shot at the 16th edged him closer to the exit door, only for a birdie at the par-five next to secure his place as he closed with a 74 to sit one under. 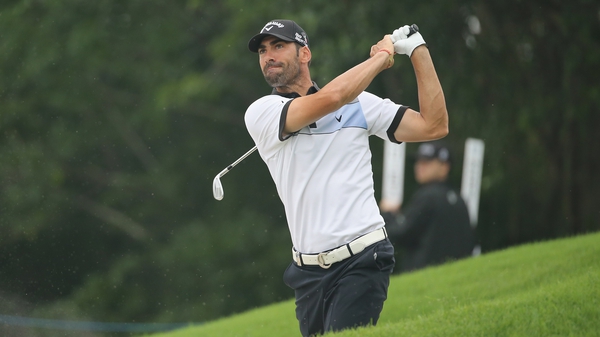