Alvaro Quiros and Simon Dyson share the lead following the opening round of the Volvo China Open at the Genzon Golf Club in Shenzhen as they both go in search of their first European Tour win since 2011.

Two birdies on the opening two holes for Quiros gave the Spaniard a superb start to the tournament and the 31-year-old built on that, adding an eagle at the par-five 13th with two further birdies to card a five-under-par round of 67 having only dropped one shot at the 10th.

Quiros was happy with his start and believes it shows he is steadily improving.

He said: "It was a good round of golf.

"It was a bit of a shame on the last par five because I was half a metre away from having a great chance to make another eagle. My game is improving. You can't see it yet on the rankings but I have been playing better."

Dyson, whose last tournament success came in the 2011 KLM Open, carded three birdies on both the front and back nine to keep the pace alongside Quiros, with a bogey on the first the only blot on the Brit's scorecard.

Five players failed to finish their rounds as fading light meant play was suspended and the leaders do not have much breathing space heading into Friday's second round, with Dyson's compatriots David Hornsey and Tyrrell Hatton just a shot adrift alongside defending champions Brett Rumford.

Michael Hoey was best placed of the Irish only two shots off the lead on three under, while Shane Lowry is level with Damien McGrane one over. Gareth Maybin and Peter Lawrie struggled to five and six over respectively.

World number three Henrik Stenson can overhaul Tiger Woods at the top of the rankings with victory in Shenzen and he started steadily to finish his opening round on one-under par and four shots off the lead, while other big names Jason Duffner and Ian Poulter had differing days.

American Duffner, ranked 17th in the world, bogied three on the back nine to end one over par while Poulter tied for ninth on three under par. 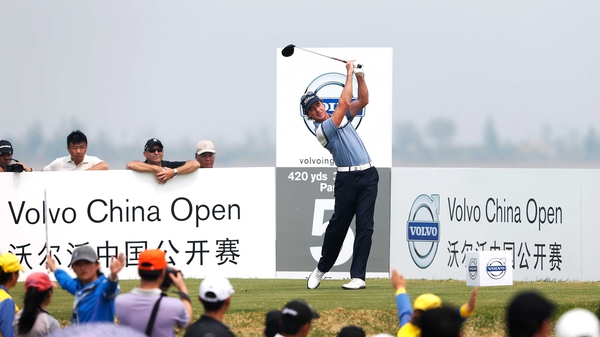