Denmark's Thomas Bjorn was a model of consistency as he tamed Royal Melbourne with a three-under 68 to take a one-shot lead after the second round of the $8 million World Cup of Golf on Friday.

The gritty 42-year-old bogeyed his first and last holes but was rock solid in between as he rolled in five birdies to finish with an eight-under total of 134, one ahead of joint overnight leader Kevin Streelman of the United States.

Graeme McDowell is nine shots off the pace after a level par 71 while Shane Lowry is five over after the Offaly man had a round of 72.

Ireland sit in 17th spot overall at six-over-par, with the US leading on 10 under and Denmark in second on seven-under-par.

"I kind of patiently worked my way through the round," said European Tour veteran Bjorn.

"On the back nine, I played awesome ... Maybe a bit unfortunate (on) the last hole."

Already uncomfortably fast in Thursday's opening round, Royal Melbourne's greens were rendered devilish during a second straight day of warm sunshine and persistent breezes and less than a third of the field finished under par.

Seemingly well-directed approach shots charged past the hole and players sweated over three-foot putts with trepidation bordering on fear.

"On the back nine, I played awesome" - Thomas Bjorn

Along with Bjorn, Streelman was among the few to handle the conditions well and charged out of the blocks to birdie his opening four holes.

He had the wind taken out of his sails, though, when he dropped three strokes in two holes midway through his round.

Following his first bogey on the eighth, Streelman pulled his second shot into a greenside bunker on the long par-four ninth and ended up with a double-bogey after missing a putt from 12 feet.

"I knew as soon as it went right of that pin I was toast," Streelman said of his eight-iron approach.

"That's the mistake you can't make around this golf course and I know better than that and it bit me."

Australia's Jason Day (70) and Portugal's Ricardo Santos (69) were tied for third, four strokes behind Bjorn, with American Matt Kuchar (68) among a group of four players a further stroke adrift.

Sixty players are competing for individual honours for the first time at the biennial World Cup, which was previously solely a team tournament. 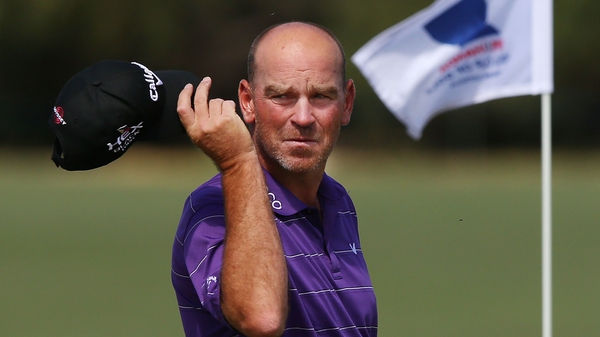