Tiger Woods produced two of the more remarkable birdies of his career and survived clattering his right hand against a tree, but still finds himself six shots adrift of leader Victor Dubuisson going into the final round of the Turkish Airlines Open.

The world number one carved his drive at the par-five 11th into pine trees down the right, but produced a brilliant hybrid second to the greenside bunker before getting up-and-down for birdie.

Ian Poutler's round of 68 sees him in second place, five shots off Dubuisson.

However, the American hit his hand against a tree on his follow-through, describing his fingers as "a bit tender" after his round.

With no serious damage done Woods birdied the 13th from 40 feet and at that stage was just one behind Dubuisson but the 37-year-old bogeyed the next two just as the Frenchman was recording a hat-trick of birdies.

It could have got even worse for Woods as he fired his drive down the last way offline - this time to the left - but after taking a free drop from a cart path he holed a 25-foot putt for the most unlikely of birdies to sign for a four-under-par 68.

That took the 14-time major champion to 15 under for the week at Montgomerie Maxx Royal, but with Dubuisson matching his birdie at the 18th Woods knows he has it all to do on Sunday.

He needs an expected top-12 placing to qualify for next week's Tour Championship in Dubai.

Shane Lowry shot a 65 to move to four under par, while Damien McGrane is on one under par after a 72.

"I hit a lot of bad shots on the back nine," Woods said. "I just had to hang in there and keep fighting.

"I'm not out of the tournament - I've got to keep fighting, and that's the way I've always played.

"I know what I'm doing wrong - it's just a matter of stop doing it and hitting good shots like I did yesterday."

Asked about the injury to his hand Woods added: "Some anti-inflams will be good. You just deal with it and play through it." 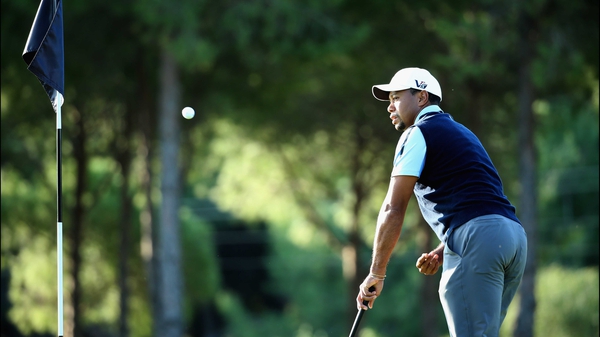