Tiger Woods produced a flawless second-round 63 at the Turkish Airlines Open to lie just one off the lead at the halfway stage in Antalya.

Unrecognisable from the player who struggled from the tee on Thursday, the world number one fired nine birdies to reach 11 under for the week at the Montgomerie Maxx Royal to sit hot on the heels of a leading group of Henrik Stenson, Ian Poulter, Justin Walters and Victor Dubuisson.

Of the Irish involved, Padraig Harrington leads the way on six under after a 70, with Damien McGrane on one under and Shane Lowry three over.

Woods, who climbed from 52nd to fifth on the leaderboard on day two, said afterwards: "I played a lot better and made some putts.

"I missed some too, so it was a round that could have been really special but I'm right there.

"We're going to have to continue going low here given the way the course is set up.

"The greens are slow, the greens are soft and I expect guys to make a lot of birdies - it's so bunched up there. I've just got to go get it."

The 37-year-old had looked decidedly rusty on day one of his first competitive start for a month, hitting only two fairways over the 10 holes he played to be six off the lead after lightning and heavy rain had delayed Thursday's action by three hours.

Matters looked to be improving for the 14-time major champion when he resumed his first round, a chip to inside five feet providing a gain at the 11th and another birdie coming two holes later.

But a dropped shot at the 18th, where he took three shots to get down from just off the edge of the green, saw Woods sign for a two-under-par 70 to remain six adrift on completion of the first round.

It was a different story when the second round began, however.

In glorious conditions Woods struck an iron close at the par-three second, holed from 12 feet at the third, then reached the green in two at the long fourth and two-putted to complete a hat-trick of birdies.

A 15-foot putt at the sixth followed, before sticking his approach to five feet at the ninth to complete a brilliant outward 30.

Woods converted from 18 feet at the 10th, but missed three birdie chances from inside 10 feet over the next four holes.

His response was to hit it even closer; a wonderful approach to three feet at the 15th remarkably bettered two holes later as the ball finished within inches of the cup, with a birdie at the last completing his scoring.

Stenson had birdied four of the last eight holes of his first round upon resuming on Friday morning to surge into a share of the lead, and a second-round 68 was enough to keep the Swede there alongside Poulter, France's Dubuisson and South African Walters. 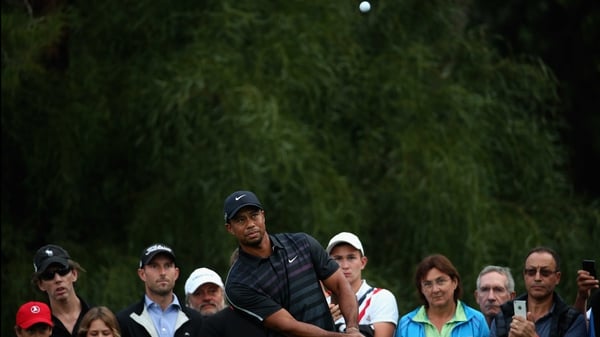