The opening event of the European Tour season suffered a total wipe-out for the second day running in South Africa today after further torrential rain.

Not a shot has been hit yet in the Nelson Mandela Championship at Royal Durban, with tournament director Mikael Eriksson describing every fairway as "almost completely under water".

A massive electrical storm yielded almost 30mm of rain overnight, adding to the problems caused by two months which have seen the normal annual rainfall in the area.

Eriksson said: "The further rain and a huge thunderstorm has obviously set us back by a long way now.

"The plan now is to try to start the first round at 0630 on Saturday morning. We are hiring more pumps and more people to try to clear the water off the golf course as fast as possible."

Sunshine Tour meteorologist Evert Scholtz said: "The overnight storm started with unstable hot air over the interior of the country, which built into a storm over the Drakensburg mountain range and then moved to the coast.

"Adding to the intensity of the storm was a flow of hot, high-energy air in the middle layers of the atmosphere, which descends from the tropics and can cause intense storms upon reaching the coast.

"Today is fairly clear, but it is cloudy over the interior, so there is the chance of some more rain this afternoon."

With next week's Alfred Dunhill Championship also taking place in South Africa officials have the option of extending into Monday - but first the course has to become playable. 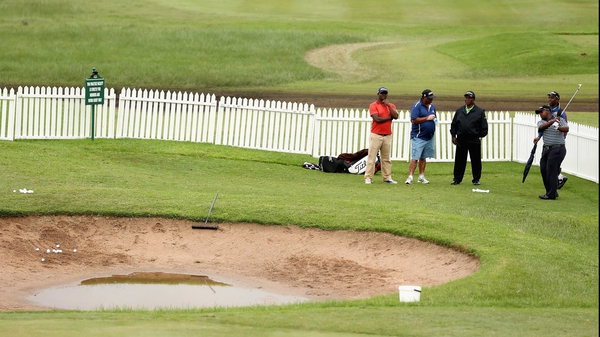 Nelson Mandela Championship round one postponed until Friday