Galway manager Cathal Murray is turning his attentions to their All-Ireland defence after watching his side fight back to claim the Littlewoods Ireland Camogie League title.

The reigning All-Ireland champions were trailing against Cork before a strong finish, aided by the impact of the bench, saw them win by four points.

Speaking to RTÉ Sport after Saturday's final, Murray expressed joy at victory but regards the latest success as akin to half-time in their year.

"We're really happy with the win. It's a final in Croke Park and you want to win it," he said.

"We're only halfway through the year and we’ll be judged on what we do in the championship but we’re delighted and proud to be league champions."

Murray praised his side's improved work-rate for helping to steady the ship after Cork's goal right at the start of the second half.

"Huge performance in the second half. We weren't in a great position at half-time. Three points down and probably lucky to be only three points down," he said,

"We didn't work hard enough for me and certainly didn't use the ball well enough. But Cork are a quality side as well.

"You needed character out there then and it was a huge sign when they went six points up, we got two points straight away to steady things.

"In the second half we ran at Cork and caused them trouble. We upped the work-rate and we’re really proud of the performance."

Both of Galway's goals in the comeback were scored by substitutes Carrie Dolan, who was named Player of the Match, and Catherine Finnerty. Murray was pleased to see those players channel any frustration at missing out on the starting XV into making an instant impact.

"The two girls coming off the bench, Carrie and Catherine Finnerty, made a massive difference," he said.

"We talk all the time about competition for places and how hard it is to get on this team. You want to develop a squad and you want to have players coming on and making a difference like that.

"Carrie is a quality player. It was a very hard decision not to start her but we felt we picked the team on form. That’s what you want from a player that’s dropped, you want them to come in and make a massive difference and she did.

"She won unbelievable puck-outs, scored a brilliant goal and set up the second goal. It’s a 20-player game now and that’s what you need."

"We wanted to set a mark in the league this year"@OfficialCamogie League final Player of the Match Carrie Dolan reacts after Galway's victory #RTEGAA pic.twitter.com/vOo5YAhllj

Cork manager Matthew Twomey, who is in his first year in charge of the 2021 All-Ireland runners-up, was philosophical after seeing his side cede the advantage they had built early in the second half.

"It was a great game but unfortunately we came out the wrong side of it again," he said.

"The disappointing thing is that we put ourselves in a position to win the game but it’s credit to Galway, I suppose that’s why they’re All-Ireland champions.

"There were seven girls out there who played for the first time in Croke Park and I suppose when things get tough in the second half you want more experienced players.

"But we’ve learned a lot from today and the league and we’ll kick on again for the All-Ireland series." 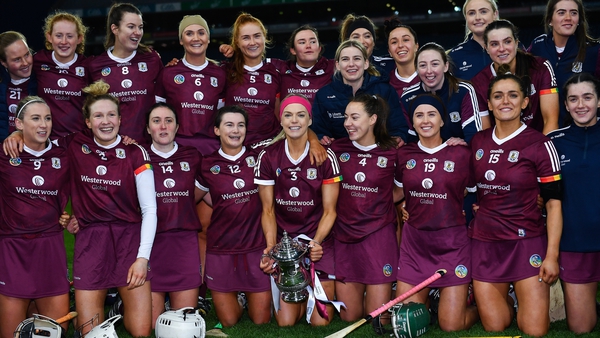