Cork's hoodoo when it comes to big games against Galway continued as the Tribeswomen came from six points down early in the second half to claim the Littlewoods Ireland National Camogie League Division 1.

The All-Ireland champions have now won five consecutive big league and championship games against Cork, extending back to the 2019 All-Ireland semi-final, and it wasn't just on the scoreboard that this was the most commanding of them all.

When Amy O’Connor slammed in a close-range goal to crown a superb attacking move at the start of the second half, the Rebels were 1-10 to 0-07 in front and it looked like their extra variety and range in the attacking sector was set to carry them to victory.

The Galway bench, led by Carrie Dolan, was to transform this game. Dolan, Catherine Finnerty and Sarah Spellman all added huge energy and zest to the westerners, while Sabina Rabbitte also landed the insurance point at the end of the contest to confirm the victory.

The strong finish was a far cry from the early stages when a youthful Cork side hit the ground running, matching Galway score for score in the opening quarter before kicking on to build a three-point interval lead.

Fiona Keating had caused Galway captain Sarah Dervan some problems close to goal at the full-forward position, making light of pre-match rumours that she would miss out due to a hand injury, but it was from half-back and midfield that the Rebels really took control.

.@CorkCamogie have scored the first goal of the @OfficialCamogie League final right at the start of the second half via Amy O'Connor to extend their lead #rtegaa @RTE2 @RTEplayer

Ashling Thompson fired over three wonderful first-half points, while wing-backs Saoirse McCarthy and Laura Hayes were also in sublime form, driving forward and chipping in with another trio of scores.

Laura Tracey was notionally lined out at full-back but with Méabh Murphy dropping deep, Tracey picked up a world of ball from a sweeping role and put Cork on the front foot time and again.

Galway had good early scores from Niamh Kilkenny and Áine Keane, but really only Ailish O’Reilly offered any consistent attacking threat as she finished the game with five points, four in the first half.

Outstanding work from Laura Hayes and Katrina Mackey set up O’Connor for a simple goal with less than a minute gone after half-time, and it looked as if Cork were set to win their first league title in nine years.

Crucially, Galway replied with the next two points through Orlaith McGrath and O’Reilly, before a joint substitution brought Carrie Dolan and Catherine Finnerty into play.

The duo made an immediate impact, combining to win a free that Dolan converted, and just a minute short of the three-quarter mark, Finnerty took a pass from Niamh Hanniffy and beat two defenders with a single sidestep before slipping the ball underneath Amy Lee to level the game.

Cork responded well initially as Saoirse McCarthy fired her third point from a pre-planned puckout move, but by now they had lost all control of the middle third.

With Dolan immediately operating as the focal point of the attack, Galway soon hit the front. The Clarinbridge player tied the game up with a free, then fielded a good diagonal ball and powered past her marker to register a vital second goal.

Again Cork tried to reply, but a glorious goal chance was placed fractionally wide of the post by Emma Murphy, and they weren’t able to mount another charge.

Two Dolan frees stretched the gap out to five, Katrine Mackey replied with two dead ball Cork points in stoppage time, but by now all Galway had to do was protect their goal to preserve their league title, with Rabbitte’s late score the cherry on top of yet another national title.

"We wanted to set a mark in the league this year"@OfficialCamogie League final Player of the Match Carrie Dolan reacts after Galway's victory #RTEGAA pic.twitter.com/vOo5YAhllj 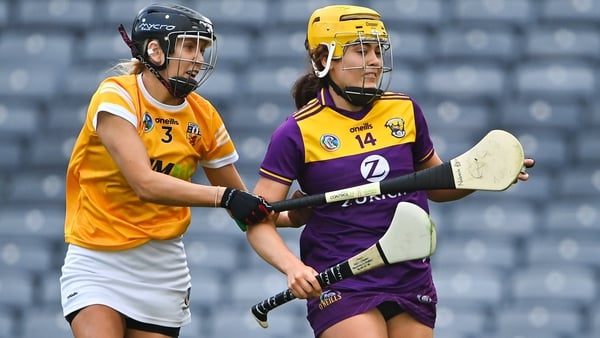