TV
Both games live on TG4.

WEATHER
Mostly cloudy on Sunday and becoming breezy with scattered outbreaks of rain and drizzle. Top temperatures of 8 to 12 degrees in freshening southeast winds. For more go to met.ie.

It's fair to say that plenty has changed since Donegal and Meath last met in a senior competitive fixture.

It was February 2016 in the Lidl National League when Donegal claimed a 3-17 to 3-08 victory on their visit to Trim in Division 2.

Looking back on the teams that lined out on that occasion, and comparing them with the recent semi-finals, Donegal have Nicole McLaughlin, Katy Herron, Karen Guthrie, Yvonne Bonner, Geraldine McLaughlin and Bláthnaid McLaughlin still involved, while Meath had current captain Shauna Ennis, Niamh O’Sullivan, Stacey Grimes, Vikki Wall and Niamh Gallogly in their starting line-up.

There has been natural flux in both squads since then and while Donegal contested the Division 1 final in 2017, Meath have gone on to greater heights.

The Royals won Division 3 in 2019 before adding the TG4 All-Ireland Intermediate title in 2020.

Last year was one that Meath will never forget, as they claimed both the Division 2 and TG4 All-Ireland Senior crowns.

It has been a meteoric rise for Eamonn Murray’s charges, who remain hungry and keen to prove that 2021 wasn’t a flash in the pan.

En route to Sunday’s final, they suffered just one defeat, by a single point against Dublin in a front of a bumper Páirc Tailteann attendance.

Both teams had already progressed to the knockout stages before that fixture, and Meath got back to winning ways in the Division 1 semi-final with victory over Mayo.

Donegal have lost just the one game en route to the final also, against Meath in a Round 3 fixture when both teams had already progressed to the last four.

Donegal, managed by Maxi Curran, looked down and out in their recent semi-final against Dublin but two quickfire goals in the closing stages turned the game on its head.

That win sent Donegal through to a first Division 1 decider since they lost to Cork five years ago, while Meath will contest their first top-flight final since suffering defeat to the Rebels back in 2006.

So, it’s very much a case of history beckoning for Donegal and Meath, with the winners set to sample that Division 1 title-winning feeling for the very first time.

In team news, Meath have named Orlaith Duff in their starting line-up, with Kelsey Nesbitt dropping to the bench, while Donegal bring in Amy Boyle Carr in place of Shauna McFadden.

Valerie Mulcahy's verdict: "There's going to be no surprise element to Meath this year. They have to wear that favourites' tag and get used to that.

"That brings with it its own challenges. People know how they play but it's still very hard to stop.

"Donegal are fierce ball-carriers as well and have some amazing forwards, who work really together and are very hard to dispossess so I think it'll be an exciting match and hopefully it's not too defensive.

"Meath have managed to score more so I'd just slightly tip them. But I wouldn't be surprised if Donegal can pull it off."

Promotion is the name of the game for Armagh and Kerry in the Division 2 final.

Kerry will be looking to avoid an unwanted hat-trick when they take on the Orchard County, who will look to build on promising recent progress.

The Kingdom suffered defeat in the previous two Division 2 finals, against Waterford in 2019 at Croke Park, and at the hands of Meath at Croke Park last year.

Armagh, meanwhile, go in search of a third Division 2 title, following previous wins in 2015 and 2005.

Sunday will mark the first time that the counties have met in a competitive senior fixture since Kerry won by two points in a group game during the unfinished league campaign of 2020.

En route to the final, both teams have been in excellent form, and two of the finest forwards in the country have been leading the charge for their respective counties.

Kerry’s Louise Ní Mhuircheartaigh is out in front in the Division 2 scoring stakes with a haul of 2-32, while Aimee Mackin has fired 3-21 for Armagh.

What may concern Kerry is that Ní Mhuircheartaigh has accounted for over 50% of the team’s scores to date, including 1-09 from 1-14 in the semi-final victory over Monaghan, while Mackin is responsible for almost 32% of Armagh’s total.

Aimee’s sister Bláithín, Aoife McCoy, Catherine Marley, Niamh Reel and Fionnuala McKenna have also shown up well on the scoring front for Armagh, who do appear to have a more potent spread of scorers.

There is just one certainty ahead of Sunday’s game, however, and that’s the loss of one 100% record.

Kerry have seen off Tipperary, Clare, Laois and Monaghan on their way to a third successive Division 2 final, while Armagh have accounted for Tyrone, Cavan, Monaghan and Laois.

Armagh’s semi-final win against Laois was certainly a statement of intent, as they ran out 7-19 to 1-09 winners.

And it’s been a much-improved campaign for Ronan Murphy’s charges, who failed to reach the knockout stages last year.

Kerry, with joint-managers Declan Quill and Darragh Long at the helm, will hope it’s a case of third time lucky as they target a return to Division 1. 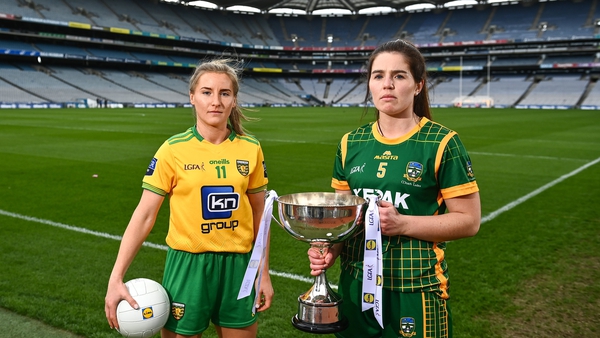