Jack O'Connor was quick to try and play down Kerry's emphatic Allianz League final victory over Mayo at Croke Park on Sunday.

The men from the Kingdom shot the lights out against an out of sorts Mayo side who were missing some big names due to injury.

The gap at the end was 15, but it might have been more but for some good goalkeeping by Rory Byrne in the Connacht side's goal.

With the Green and Red in Connacht SFC quarter-final action against Galway in three weeks, O'Connor suggested that today's game wasn't the main thing in their minds at the moment.

"It's hard to know how much intent Mayo had," he told RTÉ's Sunday Sport.

"One eye, if not two of their eyes were on the Connacht championship game in three weeks, so it's hard to know [where we are].

"We've five weeks until our Munster championship game with Cork and maybe that meant we could go a bit more flat out today.

"That showed in the last 20 minutes.

"It was competitive in the first half. I felt we left a good share of scores behind us in that time. We told the lads to settle down and be a bit more patient with the ball up front.

"I thought we were forcing it a little bit. In the second half Mayo had to chase the game a little bit and we played on the break.

"David (Clifford) and Paul Geaney and Tony Brosnan, when he came on, got a lot of space up front. We know what David can do when he gets space." 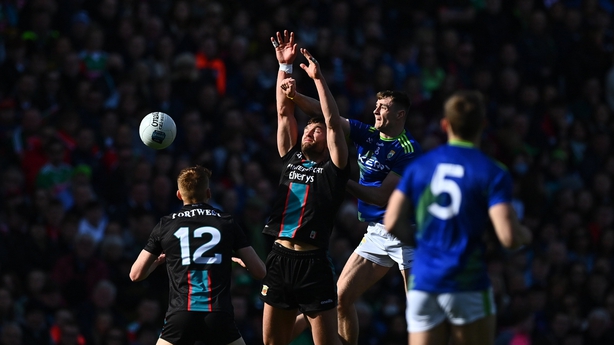 Asked specifically about Clifford, who kicked 1-05 from play, O'Connor added: "David is a great lad, very level-headed. He's at the top of his game at the moment but he keeps his feet on the ground.

"He's great with the other players, not big-headed or cocky. He's a team player above all else and that's why I respect him.

"I don't believe in piseogs," was the 61-year-old's response when this was put to him.

"But it never hurts to win a league when it's in the same calendar year as the championship."

Mayo manager James Horan acknowledged that it had been a disappointing day for his side, in front of just over 31,000 supporters.

Oisín Mullen was withdrawn from the matchday squad shortly before throw in, but the one bright moment was the return of Cillian O'Connor, who came on late to make a first competitive appearance for the county since last summer.

"Kerry were very good and we were very bad," Horan said.

"But they were very good, so that's just the way it is.

"If you live and die on one game it's not a very good review. We look over the whole league and see what we can take from it, and there's a lot.

"We got some good results and good performances. We got guys back on the field today but we've a lot of injuries to deal with.

"Hopefully our pitch is sorted for next week so we can get down to getting ready for our championship game. Galway are a very good team who have been going very well.

"Any game against them is always very tight but it's one we're certainly looking forward to."