Armagh are expected to appeal the three bans handed down following their Allianz League clash with Donegal while the Tír Chonaill County have confirmed that they will be accepting one-game bans for two of their players.

It means that Donegal duo Neil McGee and Odhran McFadden-Ferry will miss the Ulster SFC meeting at Ballybofey next month between the two counties after being cited following unruly scenes at the full-time whistle.

It is understood the players were named in referee Paddy Neilan’s report for contributing to a melee.

Armagh players Nugent and Mackin have contributed hugely to their side’s league campaign, while the talented forward Campbell has also seen plenty of playing time.

Meanwhile, Odhran McFadden-Ferry was named on the GAA.ie team of the week only days ago whilst the highly experienced McGee would have been a major presence in the Donegal camp following his return from injury.

The proposed suspensions come not long after five players were also handed one-match bans after the Tyrone-Armagh Allianz League game with referee for that game, David Gough, outlining Category III offences "to behave in any way which is dangerous to an opponent."

All five players on that occasion – four from Tyrone and one from Armagh – appealed the suspensions.

But the bans were upheld by the GAA’s Central Hearings Committee. 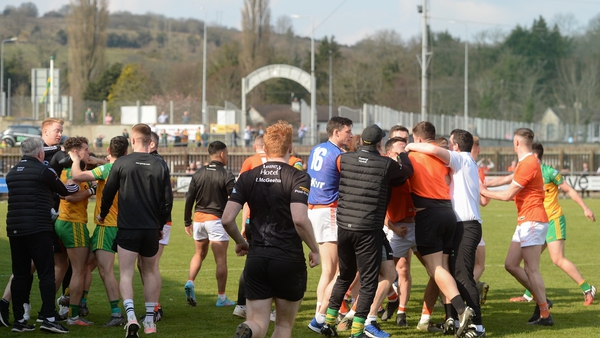