Derry's over-reliance on Shane McGuigan could be the key obstacle in stopping them from becoming one of the top teams in the country over the next couple of the years, according to Pat Spillane.

The Slaughtneil dual player, who was controversially dismissed in Sunday’s Division 2 draw with Roscommon, has racked up 1-27 in the Allianz Football League so far this season – approximately 38% of their total scores.

Speaking on the RTÉ GAA Podcast, Spillane said that McGuigan’s brilliance might be enough against Division 2 teams, but they’ll need more ammunition if they make the leap to the top tier.

"Derry, there’s no doubt about it, they tick an awful lot of boxes," said Spillane.

"They have that athleticism, they have that physicality, they're transitioning quicker, they’re playing more front-foot football.

"If there is an issue, if there is a problem, and it will be found out when you go to bigger levels, I think they’re too dependent on Shane McGuigan to provide the bulk of the scores.

"Shane got eight out of 12 yesterday (v Roscommon), five from frees. I don’t think there’s enough consistent score-getters in the other five (forwards).

"When you come up against the big teams whether it’s the Tyrones or the Monaghans or the Donegals in an Ulster Championship or in getting to an All-Ireland semi-final, Shane will need more support."

Spillane also took a sympathetic view to the performance of Tipperary referee Sean Lonergan who came under the microscope after issuing two red cards, two black cards, 13 yellow cards to players and one to Oakleaf County manager Rory Gallagher.

The last of those cards, a second yellow, went to McGuigan with television replays suggesting that both sanctions on the Derry forward were extremely harsh.

To make matters worse for the visitors, it meant that the player wasn't on the field to kick a potential winning free seconds later with Emmett Bradley dragging his effort to the left and wide.

Spillane said that people need to remember that match officials are not able to avail of replays.

"I do feel sorry for them," he said of referees.

"I know every night we are on League Sunday or doing The Sunday Game there are instances of yellow cards and red cards. We really have to rerun the piece one, two, three, four times before we can make a definitive decision.

"Even at that, we’re still not sure." 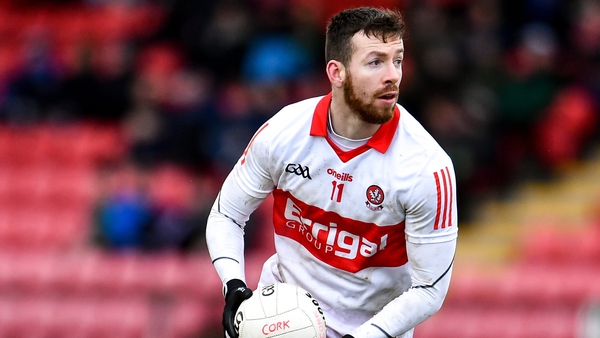 The demise and rise of Derry football