Dessie Farrell dismissed talk of a Dublin crisis but says their "sights are set" on peaking for this summer's All-Ireland Championship after a third Allianz Football League defeat in a row on Saturday.

After losses to Armagh and Kerry, Mayo were the latest side to consign the Dublin manager's side to defeat in 2022 and leave them at the foot of Division 1.

Speaking to RTÉ Sport, Farrell acknowledged that Dublin are in transition but saw positives at Croke Park despite the 2-11 to 0-12 loss to the same opponents who beat them in last year's All-Ireland semi-final.

"Not for us it's not," he said of the suggestion that Dublin's form represents a crisis of sorts.

"Obviously it's disappointing the string of results we had, but there's a combination of factors involved in that.

"While the results have been poor, there has been certain aspects of the game, our performances, that have been quite pleasing.

"We're getting an opportunity to try out a lot of new players as well, we have some of the older senior guys coming back from injury over the coming weeks as well, so for us it's about taking it game by game and that's the way we approach it."

Farrell added that talk of battling against relegation from Division 1 would not be a focus for his side because "that brings a pressure that isn't going to be helpful" to the players.

"In that mode of transition, it's always going to be a challenge to try and be as competitive as you can and that's the name of the game for us.

"We've a couple of months and we have our sights set on what will happen this summer and whether we'll be good enough or not, it remains to be seen. But everyone is working towards that plan."

On the possibility that Dublin's strength in depth is not as potent as in previous years, Farrell instead put the focus on the education his younger contingent would receive.

"All I can say is the young lads we've taken in, they understand they've a lot to learn but I've been really happy with their attitude. They're keen and eager and it's a big, big step up," he said.

"To be fair to the senior players, they've embraced that youth. It's a different dynamic in the changing room but the senior lads have been brilliant with them. They're great teachers in their own right."

Dublin led narrowly when Mayo scored their opening goal as Jack Carney got in behind and saw his shot strike the post but go in off the back of goalkeeper Evan Comerford's head.

Farrell acknowledged that his side will need an improvement defensively to prevent more moments like that.

"We've been leaking some of those types of goals and you could call it unlucky or you could say we just need to be a bit tighter at the back and it's the latter we'll be focusing on," he said.

"I'm laughing at the use of the word 'crisis' there" 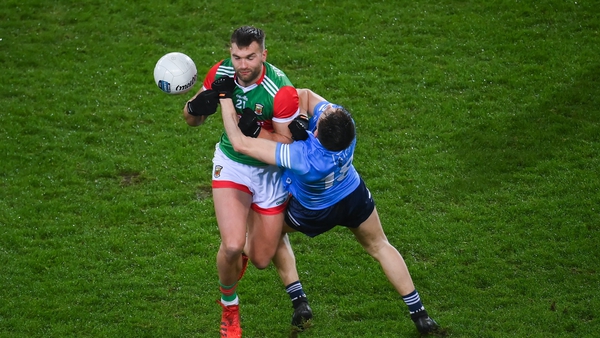