These must be sweet days for Mayo supporters, lording it over Dublin at Croke Park again and consigning the struggling Sky Blues to an Allianz League relegation battle.

It took Mayo nine years and 18 league and championship games before they eventually beat Dubin last August, and they have now repeated the feat to buttress their own Division 1 position.

First-half goals from Jack Carney and Aiden Orme laid the platform for Mayo's second win of the campaign which, allied to their draw against Donegal, leaves them joint top of the table with Armagh.

There were seasonal returns too from Matthew Ruane and Oisin Mullin - the latter taken off late on as a precautionary measure following an ankle jar - and the duo were among eight different scorers.

Conditions were poor with rain sheeting across GAA headquarters throughout but Mayo made light of this with an accomplished display and big performances from Diarmuid O'Connor and Rob Hennelly.

They will look to their Round 4 tie against Armagh next weekend with confidence though Dublin's trip to Newbridge to play Kildare is now a must win.

That's about the only positive so far from a campaign that has yielded defeats to Armagh, Kerry and Mayo.

Dublin had a strong second half against Kerry but regressed against Mayo, making unlikely unforced errors all evening and kicking several bad wides which cost them any chance of a result.

Ruane scored Mayo's second point in the fifth minute to move the visitors 0-02 to 0-00 clear and while Dublin responded with four points in-a-row, Ruane and Mullin pointed again to tie it up at 0-04 apiece.

Mullin clipped a terrific score from the right wing and underlined yet again what an asset he is to the team and how fortunate Mayo are that he knocked back a winter AFL offer.

Dublin led briefly through Ciaran Kilkenny but Carney's 21st-minute goal put Mayo ahead and they would remain in that position virtually for the duration.

There was a touch of fortune about Mayo's first goal as Carney's initial strike came off the foot of the post before cannoning off the back of the head of Dublin goalkeeper Evan Comerford, who'd performed a full-length dive.

But the influential O'Connor's probing hand pass from the left wing after beating Michael Fitzsimons to the ball, finding the onrushing Carney in space, was sumptuous and deserved to create a goal.

A three in-a-row of Dublin points from former U20 star Ross McGarry and Dean Rock steadied Dublin before they were suckered with another Mayo goal.

This time Orme did the damage in the 32nd minute as he played a clever one-two with Ryan O'Donoghue before palming home at the Hill 16 End.

Goalkeeper Hennelly closed out the first-half action with a point from a '45, leaving Mayo 2-06 to 0-09 ahead and eyeing a significant win.

Dublin needed a serious improvement but only added three more points in the second half, and just two from play.

Substitute Lorcan O'Dell, whose 45th minute goal effort was tipped over by Hennelly, Rock and John Small grabbed those scores.

Mayo only added five more points themselves but were always in control and defender Michael Plunkett twice found a huge area of space down the right from which to kick a brace of points.

O'Connor, fed by sub Kevin McLoughlin, rounded off the scoring for Mayo to seal a fully deserved five-point win.

In Division 4, Carlow responded to their 23-point hammering at the hands of Sligo with a 2-12 to 2-08 win over Waterford at Netwatch Cullen Park.

Darragh Foley had his eye in early on to help the side into an early 0-04 to 0-01 lead, and they moved further ahead when Jordan Morrissey found the net in the 17th minute.

The gap would be six points at the break as the hosts led 1-05 to 0-02, and Conor Crowley would push them further ahead shortly after the break as he grabbed Carlow's second goal.

Despite two goals from Dylan Guiry, including a very late penalty, Waterford were unable to reel in their opponents and lost by four points. 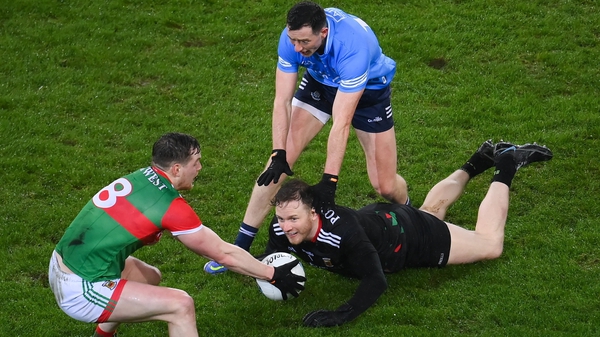