Last December, Dublin captain Sinead Aherne found herself posing on Grafton Street in her full kit for media duties, framed by the warm glow of yellow Christmas lights. It was not how she - or any player - had prepared for an All-Ireland final before, but 2020 will go down as a year with a lot of anomalies.

This summer things are a little more orthodox.

The Dubs lifted their fourth All-Ireland title in a row five days before Christmas when they saw off Cork in an empty Croke Park. On Sunday, they'll square up to surprise package Meath in the decider after the Royal County stunned the Rebels with an incredible late comeback in the semis.

With the attendance capped at a maximum of 40,000, HQ will be buzzing again - and Aherne can't wait.

"It was strange, five days before Christmas going to Croke Park," she said when reflecting on last December's showpiece.

"We could walk in and there was nobody around. It's great to be back [with fans there]. It's not just the colour and the noise and having friends and family there, it'll add that extra bit of excitement to the game, particularly in those tense, close moments.

"Meath are there on merit. They've been impressive in the championship so far. We expect a huge battle."

Meath are indeed there on merit having skated through the championship off the back of winning Division 2 of the league in June. Eamonn Murray's exuberant side took the All-Ireland intermediate crown a year ago and have some seasoned performers to guide their younger talent. 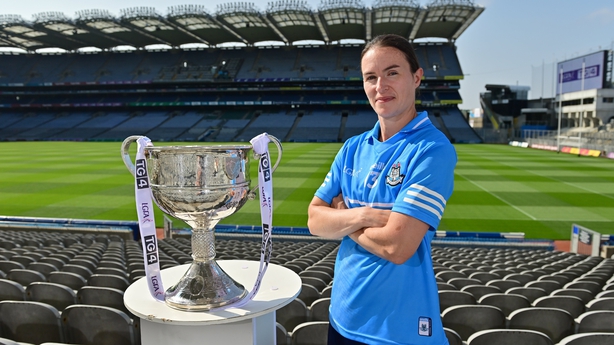 The Dubs may be heavy favourites, but they'll be on their guard.

"They've come through some really tough matches," said Aherne. "They took down Cork in the last match, Armagh in the previous one. I suppose we have experience in senior finals but Meath have plenty of experience themselves, in terms of being in Croke Park this year and three intermediate finals on the bounce.

"I know they'll take a lot of confidence from that. We'll obviously be paying them full respect.

"We're really looking forward to the challenge. They've got some fantastic players, they're very confident and have absolute belief in the system and style of football they're playing."

Dublin boss Mick Bohan has spoken about the fresh challenge Meath will pose - the counties haven't met since 2016 - and the reigning champions have been doing their homework over the last two weeks.

The five-in-a-row chasers will go into the contest armed with information but Aherne, who already has four All-Ireland medals to her name, warned the prep will only help if Dublin utilise it properly.

"The backroom team and the players to a certain amount have looked at [the stats], and the information that comes to us... it'll be down to how well we do with it when we come up against them.

"It's all well and good knowing and being forewarned about them but we don't really know how it's going to turn out or how you're going to deal with those threats until you experience them.

"They have exciting players, strong runners, they're very organised in defence so those are challenges we'll have to be prepared to deal with.

"With Meath, there'll be patches where you might get on top but it's swings and roundabouts in that way. I don't think it's going to be a case of either team getting to fully impose their own game plan on it.

"We'll just have to roll with them a little bit and be patient in how we and approach it."