Mayo manager James Horan has praised his side for their stunning turnaround victory over Dublin in their All-Ireland semi-final clash at Croke Park, but he could not hide his anger at the "dangerous" tackle that ended Eoghan McLaughlin's afternoon.

The half-back was met by a hefty challenge from John Small in the second half that could easily have led to a red card, but referee Conor Lane opted not to even award a free.

McLaughlin stretchered off and taken to hospital.

"I just thought the Eoghan McLaughlin one in particular, I was pretty close to it, I thought it was very dangerous. The way Eoghan fell, you know by the way a guy falls that they're in bother and the play just sort of went on. I was annoyed about that, yeah."

That was the major blemish on a glorious day at the office Mayo.

Six-in-a-row champions Dublin were in cruise control in the first period as they strolled to a 0-10 to 0-04 interval lead, but amazingly they would only score four further points in the second half and extra-time combined as the Connacht outfit took the fight to them after the break.

"We were probably tentative in the first 15 to 20 minutes, whether we should push forward or hold a little bit," Horan said afterwards.

"(We) got a bit caught in that maybe. Even with that, we had three or four very bad wides and we had a free that we missed. It could have been 10-7, even though we played very poorly but our energy wasn't what it usually is.

"We managed to lift the energy a bit for the second half and things take off from there, usually." 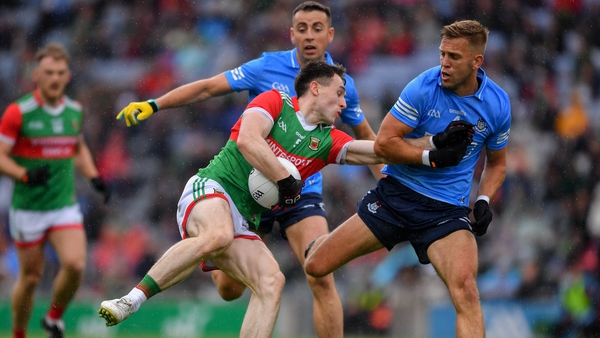 Mayo v Dublin ratings: Durcan and Ruane to the fore on a famous night for the Connacht outfit