Mayo swept to triumph in the Nicky Rackard Cup final, erasing the disappointment of defeat in last year's decider to make no mistake in collecting their second title.

Brilliantly led by inspirational skipper Keith Higgins, they were never troubled by a Tyrone team that was always chasing the game.

Goals from Sean Regan and Cathal Freeman early in each half kept the Westerners right on course, and they never looked like being hauled back by the Red Hands.

Shane Boland knocked over a couple of early frees, and in the fifth minute the Connacht men struck for their first goal.

A poor clearance from goalkeeper Conor McElhatton went straight to Sean Regan, and he sent a rocket to the net for a five-point lead.

Damian Casey got the Red Hands going with two converted frees, but they struggled to break the defensive line built around David Kenny and Gary Nolan.

Mayo led 1-07 to 0-04 at the first water break, and survived a minor scare when full-back Michael Morley was sent to the sin bin. He conceded a penalty in the process, but Bobby Douglas saved from Casey.

Despite being a man down, the men in green and red kicked on, hitting four points before being restored to the full compliment.

Cathal Freeman sent over a couple of long-range scores and there were points as well from David Kenny and Cormac Phillips as they reached the break with a commanding 1-15 to 0-05 lead.

Kenny was a commanding figure at the heart of the Mayo defence, with Cathal Freeman providing extra cover as sweeper as they frustrated the Ulster side.

Casey did send steer over a couple of scores early in the second half, and Conor Grogan broke through for a 42nd-minute goal, but Mayo were soon back on the attack.

Cathal Freeman got in behind the last defender to fire a shot low to the net for his side's second goal and a 13-point lead by the 45th minute.

Mayo were then awarded a 53rd-minute penalty, and with goalkeeper McElhatton sent to the sin bin, CJ McGourty stepped in to face up to Cathal Freeman, but he sent his shot wide.

There were no worries, however, for a comfortable Mayo side as they continued to dictate despite spells of Tyrone pressure that produced scores for Casey and Kearns.

Freeman, Regan and Jason Coyne stretched the lead and they won pulling up to add to their 2016 success. 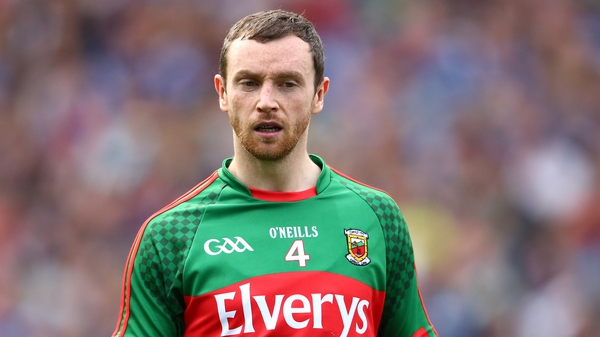