TV
More games live than ever before, with Saturday's action seeing Tyrone v Donegal on TG4 and Kerry v Galway on eir Sport. On Sunday, the TG4 cameras will be at Hyde Park for the clash of Roscommon and Dublin, while the same channel will have a deferred showing of Monaghan v Armagh from 5.30pm.

All other games are available to watch on GAAGO.

Saturday: Sunny spells and showers, some may be heavy with the risk of isolated thunderstorms. Highest temperatures of 11 to 15 degrees in light to moderate southerly or variable breezes.

Sunday: Sunny spells and scattered showers, becoming widespread during the afternoon with some showers turning heavy or thundery at times. Highest temperatures of 12 to 15 degrees, but cooler along northern coasts. For more go to met.ie.

And so 147 days after Dublin lifted Sam Maguire again, competitive action resumes with a shortened league.

The initial plan was for the spring competition to start on the last weekend of February, but that was scuppered when the GAA lost its elite, Level 5, status. It was then hoped to get things going on the Easter Weekend, but the Covid situation did not allow for competitive action at that juncture.

Here we are then in the middle of May. The hurling league is up and running, with 15 games down for decision in the big ball game this weekend.

Something had to give, well, two things had to give. The desire to get the championship up and running, as well as the club scene later this summer, leaves us with a different way of running the league and no back-door in the championship.

In dealing with the here and now, each of the four divisions in the Allianz Football League will be split into two sections - North and South. The reason for this is to cut down on travel and so reduce the chances of picking up a Covid-19 infection. Unfortunately for London, they will not be participating this year, so Division 4 South consists of just three teams - Waterford, Wicklow and Wexford.

After round-robin games, the top two in each divisional group will advance to the league semi-finals and then a league final.

League finals will only be played on the weekend of 19/20 June if counties involved are not playing in the championship the following weekend. If that is the case, then joint winners will be declared for Division 1 and joint winners and promotion for Divisions 2, 3, and 4.

Most teams will play either four or five games in this year's league.

So that's how it works.

For breaching Covid-19 training rules, Cork, Dublin, Down and Monaghan will have no home games in this year's league.

Kerry begin the defence of their Division 1 title against Galway, whose last title win in the top tier was all of 40 years ago when they beat Roscommon.

It would have been a winter of discontent for fans of the Kingdom after the way they exited the Munster championship against Cork. The plan to come up with style of play to firstly see off the Rebels and then thwart the Dubs on that Saturday before Christmas never got much of a run out.

They will be out to make amends, and no doubt will want to be still involved come August.

Elsewhere in the top flight, the Rossies return, with a nice opener against Dublin to get them going. The Dubs won't have Dessie Farrell on the sideline, but Dean Rock, speaking at a recent media event, says the squad will be able to cope with not having a big personality calling the shots.

"Of course, it's strange not having Dessie there because he's obviously a big personality and a great person to have around the group," said Rock.

"Mick Galvin will obviously be there now and take charge of the team for the National League and foreseeable future. He's ably assisted by Darren Daly, Brian O'Regan and Shane O'Hanlon. 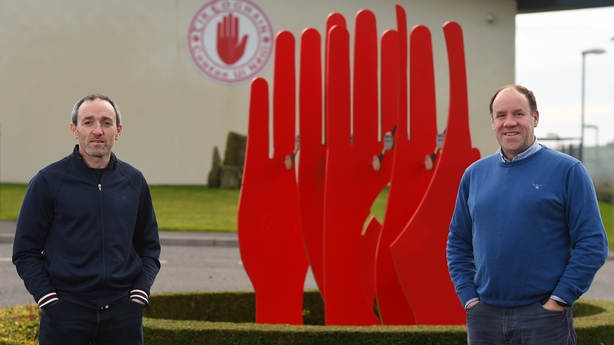 Brian Dooher (L) and Feargal Logan (R) begin their term as new joint managers of Tyrone, who are bidding to win the Division 1 title for the first time since 2003, which was also Mickey Harte's first season in charge. Dooher featured at right half-forward on the Red Hand team which also won the league title in 2002.

A breach of Covid regulations by Monaghan means they lose home advantage for the clash with Armagh, who are back in Division 1 for the first time in nine years.

Much change for the Green and Red

Mayo kept journalists ticking over in the first week of January with news of daily retirements. In reaching last year's All-Ireland final, we got a chance to see what's coming through. The likes of Oisin Mullin, Eoghan McLaughlin, Ryan O'Donoghue and Tommy Conroy will no doubt benefit from games against Down, Westmeath and Meath.

I know it's all about what winning one piece of silverware in Mayo, but a swift return to the top flight would start this year nicely.

In the southern section of Division 2, Cork, Kildare, Clare and Laois square off. The Rebels' 'home' game against the Lilies will take place at Semple Stadium.

Limerick mark their return to Division 3 for the first time since 2016 with an appetising clash against Tipperary who pulled off a sensational success in last year's Munster championship.

Wicklow are back in the third tier for the first time since 2013, where they will begin their campaign against Offaly.

Division 4 North, while featuring two Connacht counties, will see four managers from the province of Ulster vying for the promotion spots. Mickey Harte's appointment as the new Louth boss may have garnered the most headlines, but much focus will also be on Harte protégé Enda McGinley as he takes the reins in Antrim, and Armagh All-Ireland winner Tony McEntee stepping up to county management with Sligo.

Terry Hyland begins his third year in charge of Leitrim.