Even the most hidebound of traditionalists, reared on the idea that kickouts did - and should - consist of goalies lamping the ball into midfield and let them fight out for it there, has got the memo at this stage. Kickouts are important.

Talk of kickouts once more dominates the analysis in advance of a Dublin-Mayo All-Ireland final.

It was in the hours ahead of the 2016 All-Ireland final replay that news broke that Stephen Rochford and his management team had taken the (now infamous) decision to drop David Clarke and start Robbie Hennelly.

Clarke was in line for an All-Star, which he eventually won, and had performed capably all season. But the number-crunchers and wise men in the Mayo coaching staff evidently found something awry with his 're-starts' - reportedly a relative lack of length by inter-county standards - and were prompted to act. 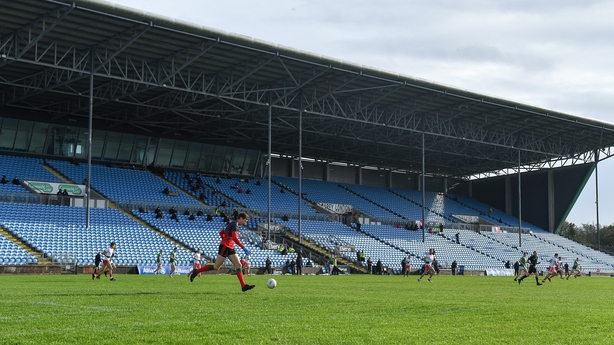 This decision, as we know, backfired disastrously, with Hennelly, who has stayed around battling gamely for the jersey since, enduring a nightmarish game. It ended on 40 minutes, when he fumbled an under-hit Paul Flynn shot, pulled down Paddy Andrews, conceding a penalty and receiving a black card.

The Rochford call ended up looking even worse in retrospect as Clarke was a model of composure on his introduction.

Both Clarke and Hennelly have been involved in a Ward-Campbell style ding-dong for several years now.

While Hennelly was top dog between 2013-15, Clarke has, despite the odd worry over his kickout style, held down the jersey for most of the decade.

However, the alarm over kickout issues is getting louder.

The statistician @dontfoul wrote an excellent, in-depth blog article this week outlining how Clarke's kickout stats have deteriorated drastically in 2020.

In the last three games, Mayo have won just 53% of kickouts that have drifted beyond the 45, and have scored just 0-03 off these possessions. By contrast, they've conceded 1-04.

Connoisseurs of the kickout art suggest that Clarke's re-starts have an unhelpful looping arc, which allows the opposing team to attack it with more gusto.

In his RTÉ Sport column, Aidan O'Rourke advised that the safest option for Mayo might be to go short when possible off their own kickout and avoid the aerial battle.

Lee Keegan has been one of Mayo's greatest assets over the past decade. At wing back, he was the complete package, simultaneously an abrasive marker and an energetic attacker.

There are few players who are able to tie down the opposition's most dangerous attacker, while being able to burst forward and get scores themselves.  The Westport player can fairly be described as a force of nature.

His greatest display was probably the 2017 All-Ireland final, when he reduced Ciaran Kilkenny, one of Dublin's most consistently influential attackers, to an irrelevance and then bounded forward to lash home a goal himself. Also worth noting that this was the second successive final in which he found the net.

These days, however, the picture is more complicated. Having shackled Diarmuid Connolly - taking a clump of jersey in the process - in 2016 and Kilkenny in 2017, he was detailed to mark Con O'Callaghan in 2019.

This necessitated him hanging closer to his own goal. This, he found a less comfortable experience. After a strong first half showing, he was powerless to prevent O'Callaghan plundering two goals in the whirlwind third quarter as Mayo's resolve wilted.

Plonked in the full-back line in 2020, he hasn't been as effective or expressive as before. Against Tipp, he flapped badly at a high-ball in the opening minutes, allowing Michael Quinlivan in for what should have been a certain goal.

There is much talk of how Keegan, as Mayo's attack dog in chief, should be asked to tail this evening. Ciaran Kilkenny has been clipping over scores and laying on scores to his heart's content in this championship.

In the '17 final, he famously only managed eight possessions across the 70 minutes, an astonishingly thorough curtailment of his influence. Has Keegan the game to muzzle the Castleknock player as before or will he be asked to have another go at stopping O'Callaghan?

An All-Ireland Football final and a year like like never before, the impossible dreamers of Mayo take on their seemingly unbeatable foes Dublin @RTE2 @RTEplayer @SatSportRTE #RTEgaa pic.twitter.com/1CI1Gtuiym

The evidence since the 'return to play' is that Mayo's inside line boasts a renewed menace in 2020.

Unless Dean Rock posts an unfeasible scoring tally this evening, Cillian O'Connor will end this shotgun campaign as the leading scorer in the championship for 2020.

People - well, Dublin fans - are inclined to roll their eyes and say "frees" but he's at the top of the charts from play too this year.

He's racked up 5-31 thus far, 5-11 coming from play. The Ballintubber player has been around so long, it feels like he should be older than 28.

Young Footballer of the Year in 2011 and 2012, one would imagine the main gong will come his way if Mayo go ahead and do the unthinkable this evening.

His form has been superb thus far. Then there's Tommy Conroy, the 21-year-old corner forward from The Neale.

"He's a great bit of stuff, that lad," an experienced voice in the press box, announced after Conroy curled over his fourth point against Tipperary. "He's what they've been missing for years."

More impressive than his quartet of points in the handy win over Tipp were his three scores from play in the pressure cooker conditions of the Connacht final in Salthill.

Defending is a more zonal business these days but the consensus that Mick Fitzsimons will be given the watching brief over O'Connor.

The Cuala corner-back is among that cluster of players chasing an eighth All-Ireland medal - with Stephen Cluxton and James McCarthy the only other players in that bracket to start regularly all year.

Fitzsimons' inter-county career has followed an odd pattern in that he was a starter in 2011 but was only a bit-part figure from 2013 through to 2015.

Re-introduced to the championship starting line-up for the 2016 All-Ireland final replay, he won Man of the Match and has been a key figure ever since.

He is generally regarded as Dublin's best man-marker. Jonny Cooper, the bete noire of opposition fans everywhere, will likely be put on Conroy. But again, this is just guessing.

There is a notion that Dublin's full-back line is their weakest department. This contention is debatable to say the least. The Dubs have conceded no goals and an average of just under 10 points this season but there's a step-up in the quality of opposition this weekend.

The champions do leave gaps at the back which can isolate their defenders. Cooper was red carded in last year's All-Ireland final and was very lucky not to get sin-binned when isolated against Cavan in the semi-final.

Is this an area where Mayo can exploit?