Former Tipperary star Shane McGrath believes Waterford can get the better of Kilkenny when they face the Leinster champions in Saturday's All-Ireland hurling SHC semi-final.

Munster runners-up Waterford were nine-point winners over Clare last weekend and McGrath believes his county man's charges can repeat their epic 2017 win at the same stage over Brian Cody's Cats, which was a first against Kilkenny since 1959.

"I think they are going to cause an upset at the weekend and beat Kilkenny," McGrath told 2fm's Game On, after praising the Déise's depth and the impact of "unbelievable" Dessie Hutchinson, who hit 2-02 against Clare.

"They had 12 different scorers the other day and five points from play from their subs bench.

"Teams Liam Cahill is over get goals. In last year's U20 final, Tipp got five goals and they will be looking to raise two or three green flags at the weekend."

McGrath believes the Deise's work-rate has improved significantly since Cahill came on board.

"This year, Waterford are more of a team than they have been in a long time. They’re working so hard for each, and if you’re not willing to put in a really hard shift, Liam Cahill’s not going to consider you.

"Last year they were scoring on average 20 points, this year they’re scoring 29.

"That’s not because lads are getting more accurate, it’s because they’re working more as a team and getting the ball into that zone, where the man in the best position is taking on the score where maybe before it wasn’t. It’s all about team. 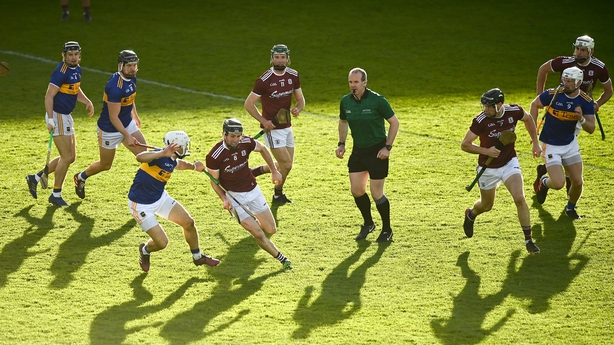 Reflecting on his native Tipperary's narrow defeat to Galway, McGrath said that Galway were "fully worth their victory" but also expressed doubts as to whether they can get past title favourites Limerick.

"They will feel they can get even more out of their key players so they’ll take massive confidence going into the semi-final," he said.

"They’ll look at getting more out of Dáithi Burke from the start, Gearóid McInerney, maybe getting more scores from Joe from play.

"They have a really strong panel. Adrian Tuohy and Jason Flynn came on and the other 13 guys on the field just looked at them and saw energy. They played a big part.

"It will be a massive test against Limerick though. Third week in a row, and I honestly can’t see Limerick being beaten."