The Premier County upset the odds with a stunning 0-17 to 0-14 victory over Cork in yesterday's decider, and in doing so claimed their first provincial title in 85 years.

"It's absolutely incredible, it’s something we’ve all dreamed of," All Star Browne, who played for the Premier County from 1996 to 2007, told RTÉ’s Morning Ireland.

"There are players out there who have literally died for the jersey.

"What a fitting occasion it was for Conor [Sweeney, captain] to lift it on Bloody Sunday weekend.

"For myself and my team-mates we all tried in vain to achieve that we’re jealous, there’s no point in saying any different.

"We’d love to be in that situation but what those guys did for us yesterday is indescribable.

"I’d say there were tears in every sitting room in Tipperary, there was probably televisions broken and balls kicked.

"No disrespect to Cork but once Kerry were beaten [in the semi-final] we felt we’d a right chance of winning this and that’s the way it turned out.

"We were huge underdogs, that was the surprise.

"History is history but in the last ten years those guys have won an All-Ireland minor, Munster minor, they should have backed up an All-Ireland minor in 2012, beaten in an Under-21 All-Ireland final, got to Croke Park in '16 so that’s the nucleus of this team, plus throw in a few younger lads as well.

"These lads play with abandonment. If they lose, they lose fighting like we’ve all done through the years.

"When they get into motion they are hard to stop.

"I genuinely felt that if our top guys stood up yesterday, I couldn’t see us being beaten.

"Our lads had the game plan right.

"Like 85 years is a long time and none of us really care who did it once we did it and that that’s book closed. We can stop talking about it now." 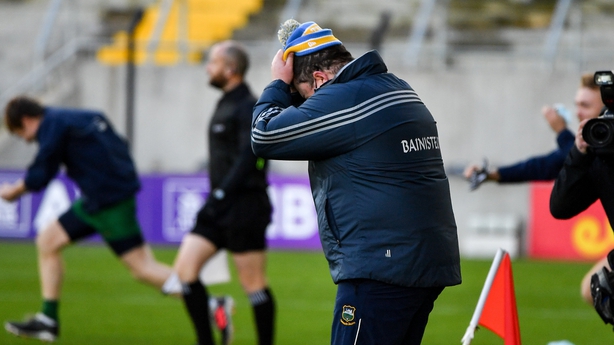 Meanwhile, Tipperary football boss David Power says his side have an "inner belief" that getting to the All-Ireland final is possible.

Connacht champions Mayo stand in the way of Tipp and an appearance in the decider. They will start as favourites but Power says yesterday's win will only boost their confidence.

"We are going to enjoy the next 24 hours, take it all in and be back training Wednesday night and then we can start looking forward to the Mayo game," he told RTÉ Sport.

"The lads played so well up in Croke Park years ago between the Galway game and the Mayo game, which could have gone either way but there is going to be that inner belief.

"We are just going to enjoy it and just embrace the thing as well.

"It is a privilege for us to be in this position and hopefully we can represent the Tipperary people again like we did yesterday."

A day of history and emotion for Tipperary - in their own words... #RTEgaa pic.twitter.com/j5J1SHG0T0

Power added that would like to see some easing of restrictions for their All-Ireland semi-final to allow all members of his panel and backroom team to attend the game.

There were jubilant scenes on the final whistle and while Power was understandable delighted with the feat, which sets up a semi-final, most probably in Croke Park, he was not forgetting those who had to watch on from home due to Covid-19 regulations restricting numbers who could attend the game in Páirc Uí Chaoimh.

"It's very tough because we have around 40 players because there’s a lot of young fellas there that we are trying to develop," he said.

"For them, they are every bit a part of it. It doesn’t matter who it is, there’s a backroom team, some of our stats lads couldn’t go to the match so there were doing the stats from home.

"It’s not about any one individual with us, it’s about the collective.

"I understand where Croke Park [administrators] are coming from as well but it is very tough but, look, we just have to get on with it.

"It’s [probably] in Croke Park and I’d be hoping [they'll allow more in].