Tipperary marked the centenary of Bloody Sunday with an excellent performance at Páirc Uí Chaoimh on Sunday to see off Cork and win the Munster SFC for the first time since 1935.

Only once in the whole game did David Power's side trail, that when Luke Connolly put Cork 0-05 to 0-04 in front in the 16th minute.

Aside from that, Tipp were on top throughout, with Conor Sweeney and Michael Quinlivan combining for 12 points between them while the addition of AFL star Colin O’Riordan for his first game for the county since 2015 was a huge boost.

Tipperary – wearing the white and green of Grangemockler, as the county had done on that fateful day in 1920 – had a superb start as Sweeney put them in front in the first minute after claiming a mark and then he doubled the lead after good work from wing-back Robbie O’Dwyer.

Kevin Fahey set up Michael Quinlivan to make it 0-03 to 0-00 inside three minutes as Cork struggled to win their own kickout but the Rebels responded as Luke Connolly sent over two points and then Ian Maguire forced a turnover which led to Mark Collins winning a free, which he himself converted.

While Tipp went 0-04 to 0-03 ahead after Sweeney got his third point, a free, a 45 and a free from Connolly had the hosts in front for the first time in the 16th minute. Just before the water-break, Tipp were level as Sweeney landed a fine point from a tight angle and they were back in the lead on 19 through a Liam Casey mark. 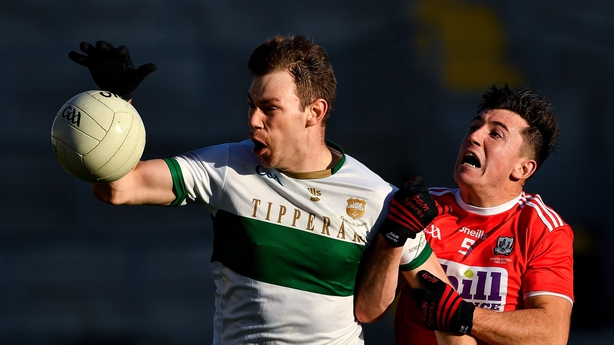 Corner-forward Mark Collins was having to come deeper as Cork sought to gain more of a foothold in the middle but they still struggled to provide good ball to their inside forwards, too ambitious with their deliveries, though one Mattie Taylor pass did set up Colm O’Callaghan to level.

However, it would be the last time that there was parity as Tipp responded with four straight points. Quinlivan sent over two in quick succession, a free followed by a brilliant effort from a tight angle, then Sweeney landed his fifth before centre-back Kevin Fahey profited from a Steven O’Brien pass after a Cork attack had broken down.

John O’Rourke did end Cork’s drought followed a well-worked point in the 35th minute but yet another fine score from Quinlivan in injury time ensured that Tipp went in with an 0-11 to 0-07 advantage.

They moved five clear with Sweeney started the second half as he had the first, pointing from a mark, and they almost moved eight clear when Stephen O’Brien had a fisted effort which came back off the crossbar and though Casey fisted in the loose ball, Cork were awarded a free out.

Missed this at the time as was still reeling but even at his moment of triumph he goes back to deflect the credit to the people who put the platform in place for him. Huge maturity and humility, and you can see how he built that culture into his team. https://t.co/OuZLeepSFD

The Rebels didn’t immediately make the most of the let-off but Mark Collins’s free and a Brian Hurley point left three in it but the goal that was becoming increasingly more necessary didn’t look like materialising. On 52 minutes, just before the second-half water-break, they did piece a good move together as Ruairí Deane, Brian Hurley and Mark Collins linked well but the latter was crowded out by the Tipp defenders, with a defensive free accruing.

Tipp pushed on after that through O’Brien and Sweeney’s seventh point, but Cork stayed with them thanks to two Collins frees and a point from sub Seán White, played in by Brian Hurley – there was a half-chance of a goal but he opted to send the ball over.

The deficit was down to two but, when Tipp won a free from the resultant kickout, Cork dissent saw the ball brought forward to the 45, allowing goalkeeper Evan Comerford to point for a 0-15 to 0-12 lead.

When Cork goalkeeper Micheál Martin then sent his restart straight to Quinlivan, Tipp had a cushion again.

As time ran out, Cork sub Cathail O’Mahony sent over a long-range free but, after a Comerford 45 came back off the post, Tipp replacement Philip Austin got what looked like an insurance score. In the 73rd minute, Cork’s John O’Rourke got his second of the game but Tipp ensured that no goal chances were conceded and they held out to mark this historical weekend in the best way.