By Kevin Egan at Brewster Park

There were incredible scenes in the closing stages of this crucial relegation battle at Brewster Park as three Laois goals in the final minutes kept Mike Quirke's side in Division 2 of the league for 2021, condemning Cavan to relegation in the process.

Given that Laois had just three points on the board at half time, having played with the aid of a slight breeze, their 3-09 tally in the second half against Fermanagh was truly incredible.

Certainly their bench made a huge impact, with Eoin Buggie and Brian Daly kicking crucial scores, while Shane Bolger played a key role in the match-winning third goal. Ultimately it was a case of the proven stars of the Laois forward line coming up trumps after an afternoon of battling against the tide in the face of excellent Fermanagh defensive play.

Laois were the only side with anything to play for in this fixture as Fermanagh were doomed to relegation regardless of what happened, but the home county didn't lack energy or purpose in the opening half, controlling possession for the majority of the 35 minutes.

With the wind in their faces, Fermanagh dropped a lot of shots short but still created far more chances, and weren’t flattered to lead by 0-05 to 0-03 at the interval.

A long-range free from goalkeeper Sean McNally rounded off the scoring, and when Daragh McGurn followed that up with the first score of the second half, Ryan McMenamin would have been very happy with the state of play.

Laois rallied however and drew level, but couldn’t follow up and again fell behind by three. Luck seemed to be against them as kicks from Ryan Jones and Tomás Corrigan were both given as points despite being hotly contested, and then the home side delivered a hammer blow when a high ball over the top was contested by Ciarán Corrigan and Niall Corbet. The Laois goalkeeper did well to parry the ball away but it fell perfectly for Tomás Corrigan, who side-footed an inch-perfect shot inside the near post.

Scores from Gary Walsh and Evan O’Carroll pulled Laois back into the tie, but there was to be another setback when Kieran Lillis was red carded for a high tackle on Danny Teague in the 64th minute.

Five points down and a man down going into the last two minutes of normal time was the scene as they produced an incredible finish.

First Gary Walsh slotted in a penalty after Kane Connor committed a foot block in the penalty area, then Evan O’Carroll stole possession from Sean McNally to set up Walsh for a second goal.

With Fermanagh on the ropes, a turnover ball at midfield won by Shane Bolger led to Paul Kingston slamming in a third, and there was still time for Walsh and Michael Keogh to tap over further points to seal a most unlikely win. 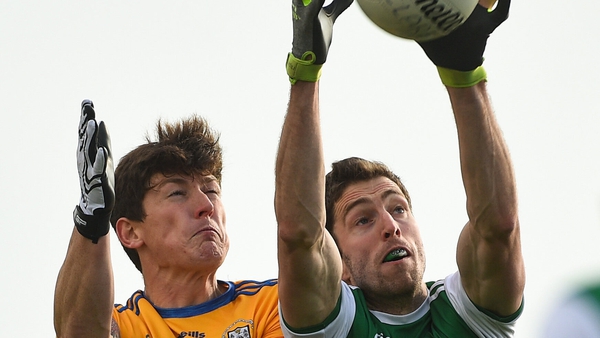 Donnelly feels Fermanagh were let down by the GAA