Galway manager Pádraig Joyce said that their shock 15-point defeat to their biggest rivals Mayo was the most embarrassing day of his career.

Joyce, who made a blistering start to his first season in charge when Galway romped to four wins from five in the Allianz Football League earlier this year, playing a superb brand of attacking football, said the 3-23 to 0-17 hammering was hard to take.

It is the biggest loss the Tribesmen have suffered in the league to their neighbours in 68 years and comes with a big price.

Damien Comer lasted just four minutes and Joyce fears the hamstring injury could rule him out of the championship, while Johnny Duane also went off early and join a casualty list which sees captain Shane Walsh out with knee and ankle injuries.

"When you are playing your fiercest rivals, if you need to motivate lads they are in the wrong game," he said.

"We should not have had to be motivating lads. Mayo were up for the game, I don't know why we could not be up for it. It is a psychological thing. I don’t know what it is but you are fighting a losing battle when you go so far behind early on." 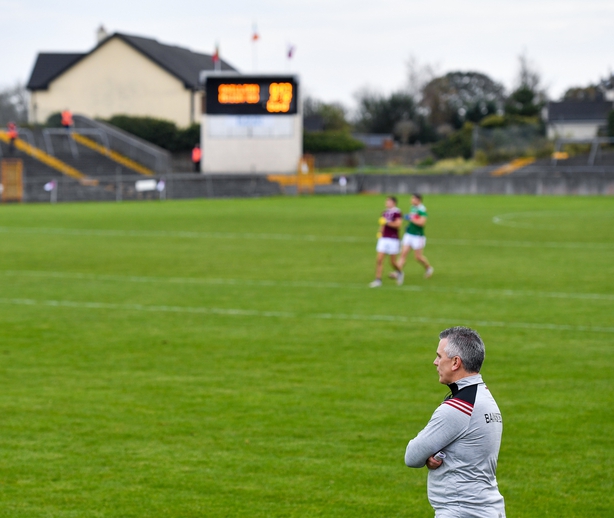 Joyce said he hopes the championship can go ahead once it is safe for people.

"I think there will be games. I think the GAA is needed in the country. I have said it before, it might give people a lift, they won't get it in Galway after that performance," he said.

"But I think GAA has a huge part to play in society. It has to be safe to do it and the experts will advise on that but I really hope with the efforts that the lads have put in, not just Galway, it's every county, the county players and have put an effort in for their clubs.

"I think sport for the winter needs the GAA to be played to be honest."

But Joyce remarked that with his side down by 2-17 to 0-07 at half-time after being steamrolled by a rampant Mayo side, he was nearly wishing a halt would be called.

"I was hoping at half-time there would be no more matches. It was probably the most embarrassing day of my career," he said.

And asked if he had got feedback from Jim McGuinness working with the squad, Joyce reckoned they might have to go further afield for help.

"Jim will have the phone knocked off if we try to contact him. If he's available we'll take him but we'll have a word with the Pope too if he came up with it," quipped Joyce.

Next up is a clash with Dublin and Joyce feels his men really have to prove a point.

"The only positive news of the day is the only way is up. We can’t go any lower than that. We are training twice this week and we have a nice battle this week against the five in a row champions," added the former Footballer of the Year who inspired Galway to two All-Ireland titles.