Cork secured their promotion from Division 3 of the Allianz NFL with a comprehensive victory over Louth this afternoon in Páirc Uí Chaoimh.

The Rebels carried their spring form into the autumn in a dominant display that maintained their perfect record and sees them go up as champions while Louth will play their football in Division 4 in 2021.

Louth started the brighter with points from Sam Mulroy and Anthony Williams but once Cork found their stride, the Wee County had no answer to their power and pace as the Rebels continuously punched holes in their defence.

They struck 3-06 without reply after Louth's initial burst with Paul Kerrigan providing the final pass to both Colm O'Callaghan and Ian Maguire for their goals before finding the net himself in the 23rd minute after good work from Maguire and Cian Kiely.

O’Callaghan also tapped over a point in that spell, as did the ever willing Ruairi Deane, while Killian O’Hanlon and Paul Walsh kicked two each.

A Tommy Durnin point finally stopped the rot for Louth and the game was more competitive coming up to the break as Mulroy kicked four more frees for Louth. Durnin tapped over a second while O’Hanlon, Kevin O’Donovan and Damien Gore found their range for the Rebels to give them a ten-point half-time advantage, 3-09 to 0-08.

Cork continued on from where they left off after the break with two points from O’Hanlon and Gore before Kerrigan slipped home goal number four after being set up by Deane. Louth’s woes were exacerbated when Fergal Donohue picked up his second yellow card but Mulroy kept showing his class, adding four more points to his personal tally.

Kerrigan then popped over a free before being replaced by Mark Collins and the Castlehaven man immediately made his mark, kicking 1-01 to leave Cork leading by 5-13 to 0-12 as they broke for water.

The game petered to its inevitable conclusion thereafter. Eoghan McSweeney and O’Donovan both split the posts for Cork, Collins added four more points to his tally while Mulroy, Durnin and Conor Whelan found the target for Louth who finished with 12 men after incidents involving Patrick Reilly and Emmet Carolan.

Louth will play Down next weekend while Cork travel to Longford, though now they can afford to focus on their clash with Kerry in the Munster semi-final. 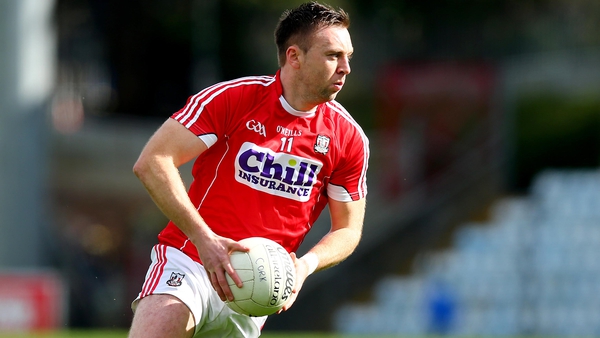