By John Graham at Inniskeen

Monaghan and Kerry met in the first Division 1 game following football's return and it was a sharper, slicker Kingdom who prevailed by three points as they led from gun to tape in Inniskeen.

Their ability to vary their game from defending in numbers to breaking quickly and creating scoring chances was a crucial part of this victory, as was their ability to take scores, which was underlined by the fact that four defenders and both of their midfielders got on the scoresheet.

But it was team captain and full-forward David Clifford who was the orchestrator-in-chief in attack, and a lot of what they achieved came through him while he also kicked some excellent scores.

Kerry got off to much the brighter start and they were three points to no score ahead after nine minutes with two scores coming from Clifford in the opening three minutes, one from a mark, and a third point arriving from Tony Brosnan.

Monaghan eventually opened their account in the 12th minute with a point by Andrew Woods when he was played in by Kieran Hughes from a mark, but Kerry responded almost immediately with an excellent point from Diarmuid O'Connor.

Dessie Ward finished off a good Monaghan move in the 17th minute but Kerry led by three at the water break after Sean O’Shea converted a 45.

Kerry responded emphatically to hit four in-a-row between the 25th and 29th minutes through Jason Foley, Gavin White, Paul Murphy and Tony Brosnan, when he chipped over with the Monaghan ’keeper stranded, to open a five-point lead.

Kieran Hughes pointed for Monaghan and they then created a rare goal chance but Bannigan was denied by the post with Kerry counter-attacking to earn a free that was converted by David Clifford to restore their five-point lead in the 37th minute.

A minute later Rory Beggan converted a long-range free for Monaghan to leave the half-time score 0-10 to 0-6 in the Kingdom’s favour.

The introduction of Conor McManus at the start of the second half had a marked effect for the home side as he chipped in with five points, one from a free.

Kerry opened their second-half account through David Moran with Conor McManus then landing the first of his scores in the ninth minute to reduce the deficit to four.

Kerry responded with points from Clifford and Brosnan with McManus keeping Monaghan in touch. However, by the second-half water break Kerry were six ahead thanks to an excellent curled effort from Sean O’Shea.

Monaghan substitute Christopher McGuinness got in on the scoring act in the 56th minute to reduce the deficit back to five points, but that man Clifford converted a mark for Kerry in response.

That left the Munster side six points ahead with seven minutes of normal time remaining, but points from Stephen O’Hanlon and McManus kept Monaghan in touch. Clifford and Tom O’Sullivan responded with points to leave Kerry six up with time almost up.

Monaghan rallied strongly to pull back two points within a minute from McManus, from a free, and a point from a mark by substitute Christopher McGuinness to leave three between the sides.

That margin still separated them after 10 minutes of injury time, the extra stoppage time necessitated as Drew Wylie was attended for an injury that saw him removed from the field with a suspected concussion. 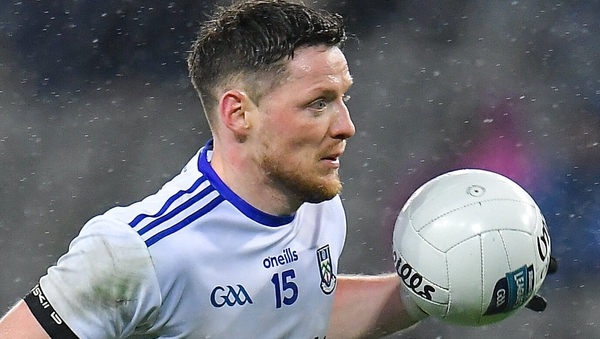 My Social distancing: Conor McManus on podcasts, pancakes and puppies