ONLINE
Live blog on RTÉ.ie and the RTÉ News Now App from 6.30pm on Saturday and from 1.30pm on Sunday.

TV
Saturday: Mayo v Kerry live on RTÉ2 and the RTÉ Player from 6.30pm. Commentary from Darragh Maloney and Kevin McStay. Joanne Cantwell will be joined by Colm Cooper and Oisin McConville for analysis. Also live on eir Sport 2 from 7pm. Tyrone v Dublin live on eir Sport 1 from 7pm.

Coverage of live and deferred games on GAAGO.

Highlights of all the weekend's action on Allianz League Sunday on RTÉ2 and the RTÉ Player from 9.30pm. Joanne Cantwell will be joined by Ciarán Whelan and Pat Spillane.

RADIO
Both Saturday Sport and Sunday Sport from 2pm on RTÉ Radio will offer live commentary and updates.

Another storm is coming.

On Saturday Storm Jorge will impact Ireland with strong winds and heavy rain expected. It will be a cold day with widespread showers and coastal gales. Showers will be mainly confined to the west and south during the morning, but will become widespread as the day goes on, and will be a mix of rain, hail, sleet and possibly snow. There will also be a risk of thunder. Daytime temperatures of just 3 to 6 degrees, in strong and gusty southwesterly winds.

There will be bright spells and further wintry showers on Sunday. More persistent rain will affect south Munster and south Leinster, possibly turning to sleet or snow on higher ground. Cold, with highest afternoon temperatures of 4 to 7 degrees. Strong southwesterly winds in the northwest at first, easing by evening.

Mayo in a battle

They have had a long stint in Division 1 and probably need another two points to make sure that they have a fighting chance of staying in the top tier for 2021.

That's where Mayo are at the moment. They were well beaten against Monaghan and, after scraping past Meath, they will need to up it against the Kingdom.

Darren Coen's performance was, perhaps, the only bright spot for Horan's side in Clones. He kicked some fine points from play. They will need him and a couple of others to still be displaying similar form come the summer.

Kerry, didn't exactly exactly shoot the lights out against Meath last Sunday, but the sight of the Mayo jersey of late normally jolts them into action.

Dara Moynihan and Tommy Walsh's arrival from the bench gave the Kingdom much needed new focus and options in attack when they were introduced in Killarney.

Meath footballers could have got something out of their game with Mayo and gave their best performance of the league when going down by three points away to Kerry.

For all their toil though, they still have no points on the board and the harsh reality beckons on Sunday afternoon if they lose again to Galway in Navan - and Donegal beat Monaghan and Mayo get at least a draw against the Kingdom. Relegation will be their lot.

Meath now don't have the aura that set them apart during the Seán Boylan era. Andy McEntee's side lacks the physicality and muscle that put the fear of God into opponents back in the 80s and 90s.

The game, of course, is different now and while the Royals have some classy performers in the shape of Donal Keogan, James O'Conlon and Cillian O'Sullivan, they do lack a couple of marquee forwards that could see them being more competitive in this top tier.

Galway are the visitors to Páirc Tailteann and on the back of a thumping win over Tyrone, will be keen to continue their push to make another league final.

As a player, Pádraic Joyce was very much a stylist and it seems that, now as manager, he wants his team to play in a style that is not only productive, but easy on the eye. As things stand, the Tribes are, you would have to say, the third best team in the country.

In his latest column on these pages, Aidan O'Rourke has been impressed with what Galway have offered so far, but is intrigued with how teams may look to disrupt their rhythm.

He commented: "The freshly reimagined Tribesmen have attacked this year's Allianz League with the energy of a squad emboldened by new opportunities. There are only a few new faces, but Pádraic Joyce’s players have responded to their new stimuli as well as any management could hope for.

"If players feel supported and that they will have opportunities to prove their worth, new coaching teams should always feel a short term bounce in energy and buy-in. Galway have achieved that – as Monaghan have – and the impact of coaching messages will be enhanced as a result.

"Opponents have now had four opportunities to examine what is different about Galway so far. Sitting on top of the league, the Tribesmen can expect teams to now set up to counteract their strengths." 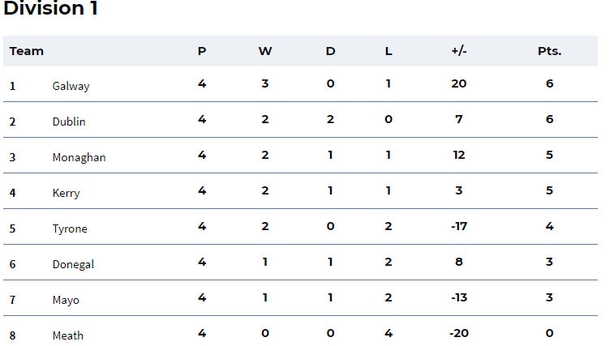 Elsewhere in the top flight, Tyrone, now without Cathal McShane, welcome Dublin to Omagh. Another defeat for Mickey Harte's side could see them in a real relegation battle.

The Dubs, after another slow start, eventually reeled Donegal in last Sunday. Dessie Farrell, says he will address the problem of such doziness. Colm O'Rourke, speaking on the latest RTÉ GAA Podcast, isn't at all concerned by this lethargy from the Dubs.

"As for the slow starts, it's a temporary thing," he said.

"When the heat is turned up, they start getting good. It (slow starts) will have no relevance later in the year.

"They were 10 down against Monaghan, five points down against Donegal. I really admire the way they get the bit between their teeth when they are struggling and push on. They have a marvellous attitude. You can't put that in a team. It comes from each individual."

Donegal and Monaghan built up a nice little rivalry in the last decade. So far this spring, the Farney will be feeling a lot better about themselves, while Donegal have let a few points slip when in good positions, They should have got something against the Dubs, where yet again Michael Murphy put in a towering performance. 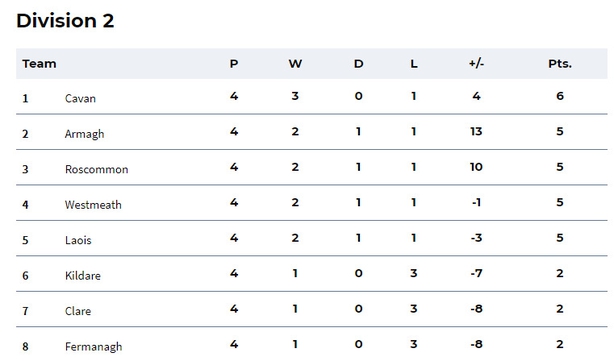 Despite what Seán Cavanagh said on Allianz League Sunday in relation to the intensity on offer in the Kildare-Roscommon clash, Division 2 is nevertheless intriguing with regard to who might get up and who will go down. Falling out of the section could have the unwanted prize of playing in Tier 2 come the summer for more than a few proud counties.

There is a big difference between the top 5 and 6 teams and the rest - @SeanCavanagh14 wasn't taken with the quality on offer between Kildare and Roscommon #AllianzLeagueSunday #rtegaa pic.twitter.com/KJ3IPPbYnH

Roscommon, after a slow start are now finding their groove, and will target two more points against Westmeath. They do have a difficult finish, however, with away games against Armagh and Cavan.

The latter lead the way and welcome Clare to Kingspan Breffni Park. Two wins from three should see Mickey Graham's men back in the top flight.

Kildare, under Jack O'Connor are struggling, and for them it's now all about staying in the section. They head to Laois, who still have designs on three consecutive promotions.

The Ulster derby involving Fermanagh and Armagh has been wiped out by the weather.

Cork did get a test against Tipperary last weekend. Luke Connolly struck for two second-half goals to push them on for victory and so preserve their winning run.

On home soil, you would have to fancy the Rebels to make it five wins from five. 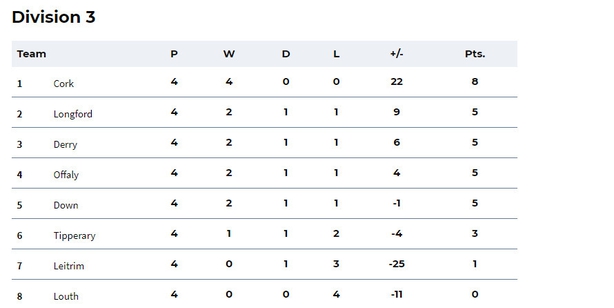 Louth and Leitrim meet in the basement battle at Dowdallshill. The Wee County desperately need the points, while the Connacht side need to rediscover the zest that saw them earn a point in Derry on the opening weekend.

In the other games the clashes involving Longford and Tipperary and Offaly and Derry will be crucial in determining who will ultimately join Cork in Division 2.

Much at play in the bottom tier 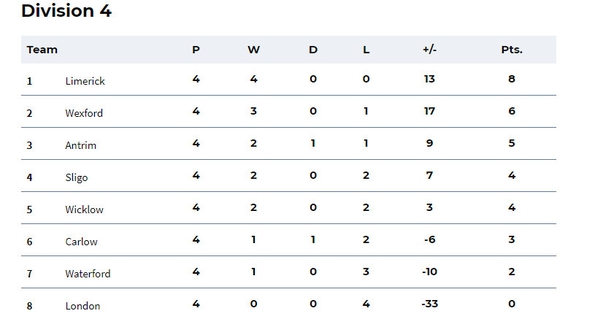 Wicklow head to London, knowing that two points could have them back in the promotion race.

Waterford, who picked up their first points away to Sligo in Round 4, host Carlow.