TV
Highlights on RTÉ2 and the RTÉ Player from 11.10pm, presented by Evanne Ní Chuilinn, with analysis from Anthony Daly.

WEATHER
Overall, dry and sunny with just light breezes. Highs of 4 to 9 degrees, coldest across Ulster and north Leinster. For more go to met.ie

Aristocratic territories at last bring us a club finale

In the 50 years of the club hurling championship, this is the first time that teams from Kilkenny and Tipperary will contest the decider. Perhaps it's fitting then that Ballyhale and Borris-Ileigh should face off in a year when tragedy has darkened the door of both clubs.

Last March, Henry Shefflin led the Kilkenny side to a seventh All-Ireland title as Galway's St Thomas's were put to the sword. When you consider that 16 of the squad that were part of the club's 2015 Croke Park triumph had moved on, credit then must go to Shefflin for integrating new names alongside established stars such as Joey Holden, Michael Fennelly, TJ Reid, Colin Fennelly and Adrian Mullen.

A win on tomorrow will see Ballyhale join Birr, St Mary's Athenry, Portumna, Sarsfields (Galway) and Cuala as back-to-back winners of the competition. In the minds of most, they are favourites to get the job done. A stern test against Slaughtneil in the semi-final was, perhaps the game they needed to get them fully tuned in across a campaign where they haven't exactly scaled the heights.

Watch all the Full-Time Highlights of the AIB Senior Club Hurling Semi-Final here on GAANOW.

On that day in Newry, TJ Reid was again majestic with a tally of 0-11, but even more telling was the way Ballyhale dealt with a late surge from the Derry champions. Composure was to the fore as Shefflin's men responded in kind, running out five-point winners. More, however, will be expected from Adrian Mullen and Eoin Cody in their respective forward roles.

Borris-Ileigh's run to this stage, you would have to say, has the caught the eye more. With All-Ireland medalists Brendan Maher, Paddy Stapleton and Dan McCormack to call on, a degree of efficiency, allied with no little skill has catapulted them this far.

The underdog tagged mattered little when they accounted for Kiladangan in the Tipp final and Ballygunner in the Munster decider.

A fortnight ago, Johnny Kelly's side survived a nervy, tense semi-final to overcome St Thomas's.

Brendan Maher can do it all! Watch this score he gets with a broken hurley from a tight angle!! pic.twitter.com/oldCSx50KJ

In youngsters, JD Devanney and Kevin Maher, Borris-Ileigh may have unearthed a few gems up front, but in Brendan Maher they have a dynamo that has been in full flow throughout this campaign. Whether it's scoring a point with a broken hurley, or his rampaging runs up the field, Maher has been a driving force in Borris-Ileigh's march so far. Will he be tasked with keeping tabs on TJ Reid at Croker?

Speaking recently on the RTÉ GAA Podcast, Brendan Cummins believes the contribution of Maher's team-mates has been significant all season long for the Tipperary champions.

"It's been a fantastic story for Borris-Ileigh, they grown and they have momentum bow. There's a real belief and a style of play. Everyone knows what Brendan Maher is going to do but nobody has found a way of stopping them from doing it.

"He goes up the pitch like Roy of the Rovers stuff"

"The big thing was winning the Munster final against Ballygunner. They were raging outsiders going into that game. There's a a battling spirit in Borris-Illeigh that will take a fair bit of beating.

"Brendan has been the focal point. But also, I think it's important to note not just Brendan Maher, but those around him have allowed him to go up the field.

"He goes up the pitch like Roy of the Rovers stuff. Dan McCormack or Ryan in the middle of the field. They're all filtering back to make sure they're somebody sitting in front of Paddy Stapleton.

"So while the individual is getting the plaudits, the collective are allowing him to do what he's doing. That's been the secret to Borris-Ileigh's success."

Holders hold all the aces it would seem

Henry Shefflin has won all the big prizes he has contested as Ballyhale boss. The collective at his disposal look well placed to keep that winning run going on he basis of a strong spine and a lethal forward unit. As well as keeping tabs on TJ Reid, Borris-Ileigh will also have be on Colin Fennelly watch, perhaps a task for Paddy Stapleton?

In last year's final, Ballyhale got the jump early on against St Thomas's and kicked on from there. In the end it was no contest. This decider should be a tighter affair. We hope so.

All eyes then on the type of 'madness' that Borris-Ileigh to make this a game to remember. 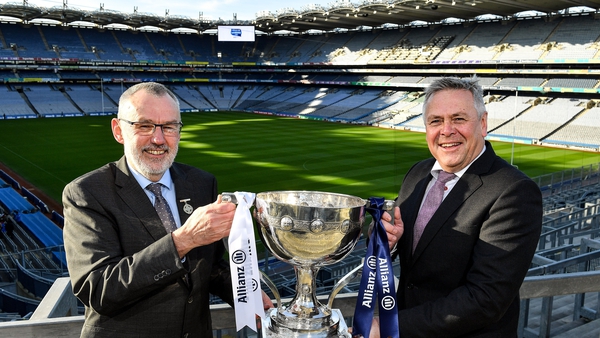 League is 'extremely serious' and set to get more so