On Saturday, delegates will attend a Special Congress of the GAA at Páirc Uí Chaoimh.

Congress usually takes place each February but this gathering has been called with a view to introducing changes to the rules of Gaelic Football and a Tier 2 Championship in time for the 2020 season.

The five motions up for debate must receive 60% approval to pass.

This is made more likely by the fact that counties usually have one delegate per 10 clubs but this is halved at a Special Congress. The unchanged Central Council representation of 50, who can mostly be relied on to support the motions as they were involved in putting them forward, will therefore make up a sizeable proportion of the roughly 185 voters.

So what exactly will be decided from 2pm in Cork City?

The most contentious of the motions seeks to introduce a Tier 2 Championship for Division 3 or 4 teams that do not reach their respective provincial finals.

Instead of entering the All-Ireland SFC qualifiers, these (up to) 16 teams would take part in a secondary knockout competition culminating in semi-finals and a final at Croke Park in July.

GAA president John Horan has been an enthusiastic proponent of the idea, which he believes will encourage the development of counties struggling to compete with the game's elite.

As it stands, counties who enter the Tier 2 competition rather than the qualifiers could still see their Championship campaign end after two games.

Motion 2 - Deciding who goes into Tier 2

With the Tier 2 championship proposals set to be voted on in Cork at the weekend, @MartyM_RTE samples the mood among some affected counties pic.twitter.com/EjCXXsftQX

Th first of the three playing rules motions seeks to reward players who take a 'mark' or clean possession inside the opposition's 45 with a free-kick.

The mark rule currently only applies to kick-outs but if this change is voted in then any pass that travels 20 metres or more and is caught inside the 45 will also earn an attacking mark.

Players can choose to play on or signal to the referee that they wish to take the free instead, which will be brought back to the 13m line for balls caught between there and the end line.

The proposal, which was trialled in this year's Allianz Football League, intends to reward kick-passing, which is perceived to have diminished in recent years.

The GAA said the change resulted in a 24% increase in the average number of foot passes in the 2019 League games compared to the previous year's Championship.

A trial restriction on the number of consecutive handpasses allowed was scrapped after the 2019 pre-season competitions. 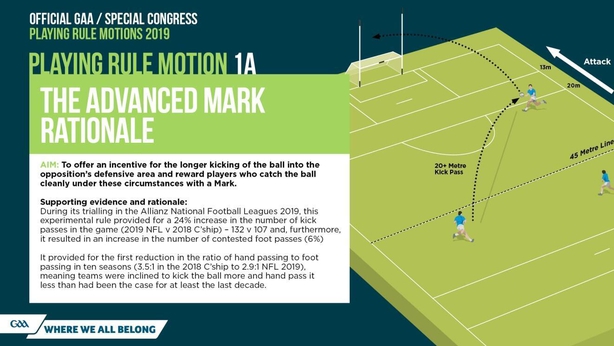 Under the current rules, a player receiving a black card for cynical play can be replaced by a substitute, unless he has already received a yellow card or his team have used their complement of six subs.

If this change is introduced, the player will spend 10 minutes off the field with no substitute allowed, reducing his side's numbers for that period.

A second black card, or a black following a yellow, will result in a red card and expulsion from the game rather than a sin-binning.

The sideline official will keep track of the 10 minute suspension, which could be interesting in underage and some adult club games where the participating teams often provide the linesmen.

The number of substitutes allowed, which has been six since the introduction of the black card in 2014, will be reduced back to five, as in hurling.

This rule provides for all kickouts to be taken from the 20m line rather than the current mark of the 13m line.

The ball must travel forward and all players must be at least 13m away and outside the D and 20m line when the kick is taken.

This change seeks to encourage long kicking and marks rather than the short restarts which have become increasingly common. 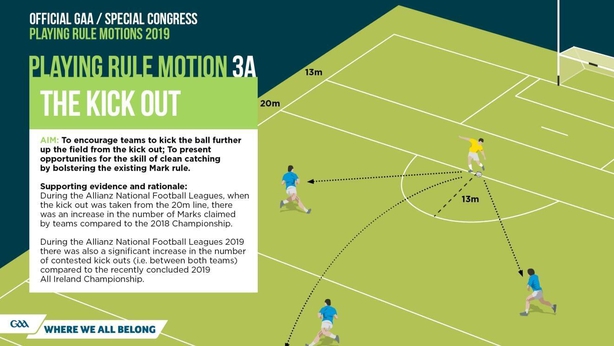