The impossible no longer impossible. The final undoable in the GAA has finally been done. Five in a row.

Dublin have put together five perfect seasons - something no other team in men's football or hurling has managed before. History made.

And with a five-point cushion in the closing stages Croke Park shook as their fans roared them home. The five minutes of added time announced was cheered like a goal and was like a victory lap.

Having survived a scare with 14 men in the drawn game 13 days previously, they slowly put Kerry to sleep in this one, using all of the know-how, experience, class and ability that has seen them win seven All-Ireland titles in the past nine seasons.

The Kingdom are definitely the next best team in the country and in all likelihood they will be the next team to beat Dublin in the Championship and the next team to lift Sam Maguire. They are young though and when the toughest of questions were posed at Croke Park here they hadn’t the answers - and that’s not to sell short a terrific side who gave so much in the month of September.

Is there six in Dublin? Only time will tell. They’re not at the peak of their powers, but they are still an awesome outfit. The greatest of their era for sure and up there with the true greats of any time.

Plenty of people have opinions on how this team was formed and the money that drives them, though those arguments should never take away from a group of individuals, on the field and on the line, who have broken down all the barriers.

The closely guarded secrets which were both teams' line-outs were finally released to the public around 20 minutes before throw-in and there were two changes - on on each side.

Eoin Murchan, who did so well in the Dublin half-back line after his long-term introduction as a temporary replacement in the drawn game, started in place of Michael Darragh Macauley with James McCarthy moving forward into midfield.

On the Kerry side Diarmuid O’Connor came in a right wing-forward with Gavin White dropping to the bench having leaked 1-03 to man of the match the last day, the Dubs’ Jack McCaffrey.

An absorbing first half ended with the sides locked at ten points apiece, though in the early exchanges it was all one-way traffic as the blue Dublin wave crashed into the Hill 16 end.

After nine minutes they were 0-05 to 0-01 ahead and Paul Mannion dropped one short to keeper Shane Ryan. Such was their dominance at this stage that another point would have put real distance between the sides.

Kerry tried route one early on, bombing ball after ball into David Clifford and getting absolutely zero return. Mick Fitzsimons took over the marking duty on Clifford from Jonny Cooper, who played a spare man in defence having been sent off before half-time in the draw.

The Kingdom also tried a full-court press on Stephen Cluxton’s early kick-outs early, but the Dubs’ captain, just like the television ad, brings us the wonderful every day and he pinged the ball to his men, drawing appreciative applause from the crowd. After a while Kerry sat off and let Dublin go short and build.

After quarter of an hour or so the Green and Gold got wise and begun to run the ball and this is where they started to get joy, Clifford and Geaney both registering three from play before the break.

Con O’Callaghan and Ciarán Kilkenny got the same for the Boys in Blue and, in fact, all of their team’s scores before the break came from play. They weren't awarded a single scoreable free by referee Conor Lane, which was controversial on occasion, and didn’t hit a wide either in a remarkably efficient shooting display.

At the other end there was confusion when Lane appeared to black card Fitzsimons after Tom O'Sullivan was bundled over as he zeroed in on goals. It was later clarified that he was ticked, though the main issue was that Con O’Callaghan committed the foul, not his Cuala club mate.

The Dubs kept Kerry at arm’s length for most of the opening period, but the Kingdom got the last two scores before the break to draw them level.

One of those scores came after McCaffrey was turned over on the attack, no foul was awarded though the ref went back after Kerry had subsequently scored to book Brian Ó Beaglaoich. McCaffrey stayed down injured and didn’t come out for the second half, replaced by Diarmuid Connolly.

The Dubs were four up inside 90 seconds, Murchan gathering the break ball from the throw-in and lancing straight through on target untouched, banging in a goal straight form the restart and O'Callaghan followed up with a point.

From here the four-time defending champions were always going to be hard to catch, given their experience and so it proved, no matter what Kerry tried.

Peter Keane on the line threw the kitchen sink at it, bringing on the likes of Tommy Walsh, James O’Donoghue, Jack Sherwood and Killian Spillane, but the momentum of this game wasn't to be shifted.

The air seemed to go out of Kerry little by little as leaders like Geaney and David Moran hit wides when there were better options on. This was a sign of a tiring team who had stood up so well to the Dubs’ for so long.

Mannion clearly didn’t have his shooting boots on, but he still added two to his total in the second half, Kilkenny kept the white flags waving as well as pulling the strings while James McCarthy and Niall Scully also chipped in with scores.

They turned over a few silly balls, but for the most part they were patient in holding onto possession, building pressure, creating chances and taking scores. In other words, it was a performance that typified the latter Jim Gavin era of Dublin dominance.

There is no one who could say that they weren’t the better team and they saw this one out with a degree of comfort. 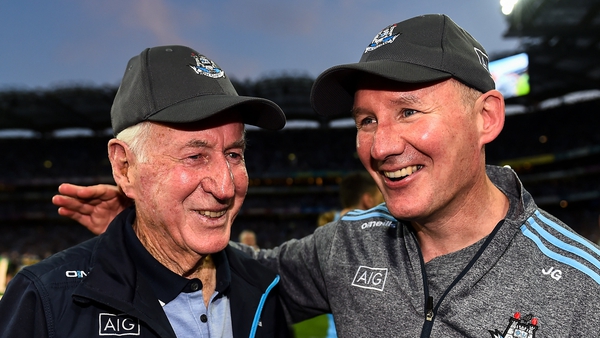 Gavin: 'I'm interested in actions and Cluxton is a doer'