ONLINE
Live blog on RTÉ.ie and the RTÉ News Now App from 5.30pm.

RADIO
Saturday Sport from 2pm on RTÉ Radio 1 will have live commentary on both games, with Pauric Lodge and Oisin McConville describing Meath-Kerry, while Brian Carthy and Eamonn O'Hara will have their eyes fixed on Mayo-Donegal.

Reacaireacht an Tráthnóna on Raidió na Gaeltachta will also cover both games live from 6pm.

TV
Sky Sports Arena from 5pm and Sky Sports Action from 5.50pm will be live at Navan and Castlebar.

Highlights of all the weekend's action on The Sunday Game  on RTÉ2 and the RTÉ Player from 9.30pm, with analysis from Ciarán Whelan, Tomás Ó Se and Conor McManus.

WEATHER
A dry and bright start in the east but cloudy conditions with outbreaks of showery rain in Munster and Connacht will gradually extends eastwards during the day. The rain breaking up into scattered showers through the afternoon, but a few of the showers heavy, with a risk of thunder in Ulster. Still warm with highs of 18 to 22 degrees. For more go to met.ie.

Here's how Group 1 is now shaping up after the second phase of Super 8s matches. #rtegaa pic.twitter.com/OPtWHEoPg4

What we do know is that Meath are out of the Sam Maguire race. That said, you can be sure they'll be looking to finish the season on a high in front of their own fans.

A draw at Páirc Tailteann would be good enough for Kerry to go through. A defeat would also see them advance to the last four if Donegal beat Mayo, but if the home side were to win in Castlebar, then it would come down to scoring returns between the Munster and Ulster champions. As things stand, it is finely balanced, with Kerry +10 and Donegal +9.

A stalemate at MacHale Park would also be good enough for Donegal to progress. Mayo, in all likelihood have to bag both points for their summer to continue, but they could squeeze through with a point.

For this to happen, Meath would need to beat Kerry by 11 points or more.

And so it has come down to this

Cast your mind back to 25 March, 2018. While, it was not the white heat of championship, the league clash of Donegal and Mayo in Ballybofey was a stirring affair. A last-gasp Kevin McLoughlin point ensured parity for the westerners and in the process kept them in the top flight, while Donegal were relegated.

Could we be in for another tight, nerve-jangling affair on Saturday evening, with the stakes now a lot higher?

Since 2012, Mayo and Donegal have built up a nice championship rivalry of sorts. The two early goals in the '12 All-Ireland final and Mayo's demolition job in the following year''s quarter-final are the standout picks from the narrative so far.

To predict how this encounter will play out, it goes without saying that Donegal are in better place and, crucially are scoring more freely than their Connacht rivals. Mayo, for their part will be glad of the week's rest after their trimming by Kerry and a less than assured performance in overcoming Meath the last day.

'I was impressed by the way they found a way to grind it out' – Eamonn Fitzmaurice on Mayo’s reaction to their opening Super 8s defeat by defeating Meath in Croke Park pic.twitter.com/Sa9vSVwEQs

James Horan's side were very wasteful against the Royals in a game where, if measured in tempo, was a way off what Kerry and Donegal subsequently served up.

What's likely to happen in Castlebar is that Declan Bonner's men will press up on the Mayo kick outs and from there will aim to use their attacking prowess to make things count on the scoreboard.

The Ulster champions, quite simply, possess the greater attacking threat. So Mayo for the first time this season will have to bring a kind of 'madness' to disrupt Donegal's momentum.

In their last four outings, Donegal have averaged 23.5 points per game, while Mayo, since losing to Roscommon, have averaged 19 points in five outings. The late scoring surge against Meath, no doubt helping to improve the latter stat.

James Horan will no doubt have a plan in mind to curb the influence of Michael Murphy and Ryan McHugh, with Murphy you would have to say having his best year in the Donegal colours. The prospect of Lee Keegan keeping tabs on McHugh should provide an interesting sideshow.

Of course, you have to add in the Stephen Rochford factor. A year ago he was preparing for a new season in charge of Mayo and then over the course of a weekend he was gone.

Donegal called on his services and a lot of praise has gone his way since then from those assessing the positive approach from the Ulster kingpins. One can't read Rochford's mind, but there may very well be a case of 'now you see what your missing' aim at those  decision makers in Mayo football.

Horan, of course, is year one into his second coming as Mayo boss. The target remains the All-Ireland, though at this juncture it's unlikely that Mayo will end their long wait this summer.

My colleague Peter Sweeney has written about the prospect that nine of the team that started the 2012 Al-Ireland final may see action on Saturday evening. Mayo fans and management will be hoping for another day out this summer, but one thing is for sure, Horan's transition project will certainly start in earnest in 2020.

Declan Bonner may start as few as four of the team at MacHale Park from seven years ago as his refitting project continues at pace.

After the pulsating draw with Kerry, Bonner feels his side are in good shape as they head south.

We went toe-to-toe with a good Kerry team out there today," he told RTÉ Sport.

"There were mistakes made, no doubt about that. We're still improving, there's a lot of improving to do.

"These lads are moving in the right direction, but there's a lot of work still to be done. They had to dig deep. They showed great character, but it's still only a point."

"Those young lads will take belief from that, that they can compete with the top teams.

"But we need to move it on now. It's (the trip to Castlebar) going to be difficult."

David Clarke, who picked up an injury during the week, Donal Vaughan & Kevin McLoughlin are the players to make way

For Donegal, Paddy McGrath, who missed the Meath and Kerry games with a calf injury and Neil McGee, sidelined for the Kingdom clash, could also return.

From 'Beautiful' Bundoran @MartyM_RTE sets the scene ahead of the eagerly awaited clash of Mayo and Donegal in the Super 8s #rtegaa pic.twitter.com/Ptv84GinA5

Since 2011 Mayo have won just 24 of their 46 games at MacHale Park across league and championship, drawing two and losing 20.

The sides have only met four times in the championship, with each having won twice. Their first was in the 1992 All-Ireland semi-final which Donegal won by 0-13 to 0-09 - a match of very poor quality. 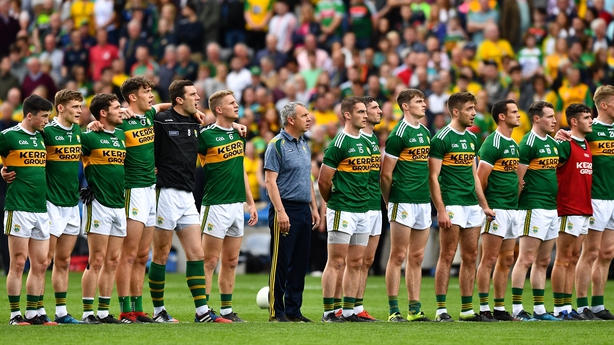 It's a case of Kerry not doing anything stupid and keeping their minds focused when they head to Navan. Meath may be out of the championship race, but with nothing tangible to play for and the shackles off, don't be surprised that the Royals make this a competitive affair.

The Kingdom have had a good Super 8s so far on the back of easily casting Mayo side and then being involved in the best game of the summer so far against Donegal. A draw may have been a fair outcome on 21 July, but Kerry's scores came that bit easier in a game where Paul Geaney rediscovered his form. Killian Spillane, in his first start of the year, kicked three great points and all told Kerry matched their opponents in the physical cut and thrust.

David Moran, after missing the last day is back to resume his place in midfield. Of course, don't be surprised that the starting side is different come 6pm on Saturday.

As to getting the job done against Meath and qualifying for the semi-final, well that's what it's all about for Kerry's Paul Murphy.

Speaking to RTÉ Sport, he said: "We're both on three points. I'd say the Donegal boys are the same. We both need to have to try and get a win in the last game to get a semi-final spot.

"We won't worry about finishing top or not. We'll just go up to Navan and try and get a result. Meath are a home team. They'll be putting in a big performance. We'll do our homework over the next couple of weeks and hope for the best above there."

Of course, Kerry, if they make the semi-final, will play either Dublin or Tyrone in the semi.

Brennan replaced Colgan late on against Mayo a fortnight ago after the latter had been dismissed on a black card and conceded a penalty.

In other changes to the Royals side, Shane Walsh and Darragh Campion come into the attack in place of the injured Mickey Newman and James Conlon.