Kerry and Donegal finished level on 1-20 each in an epic Super 8s clash at Croke Park, inseparable at the end of a thrilling contest which saw them level on 14 occasions.

Three points each from Sean O'Shea and Paul Geaney helped Kerry to a 0-10 to 0-9 interval lead, with Paddy McBrearty hitting three for the Ulster men.

Paul Geaney grabbed a Kerry goal, but Michael Murphy netted a penalty to regain the lead for Donegal.

In absorbing final quarter. Many heroes emerged, with Murphy finishing with 1-07 and Geaney with 1-04.

In front of a crowd of 48,723, Jason McGee and Stephen O'Brien traded early scores, and as a terrific contest came quickly to the boil, play swinging from end to end, with influential figures from both sides making their mark.

This was especially true of Donegal, whose inspirational skipper Michael Murphy was a driving force, along with Ryan McHugh, and it took some excellent defending from Gavin Crowley and Gavin White to curb the additional threat posed by Paddy McBrearty.

And Kerry had the threat of David Clifford, who only managed one point, from a free, in the first half, but was always looking to get on the end of Sean O’Shea assists, and was denied a goal by a smart Shaun Patton save.

Patton’s kick-outs were on the money, while Shane Ryan struggled with his restarts at the other end, but for all that, it was Kerry who eased into a two points lead at the start of the second quarter, thanks to the dash and finishing of Stephen O’Brien (0-2) and Paul Geaney (0-3).

But the Ulster champions were never found wanting when it came to posting a response, with Murphy providing the assist for a couple of McHugh scores, and powering through for a brilliant point himself as he traded passes with McBrearty.

McBrearty brought the sides level for a seventh time, but Geaney and O’Shea restored the two points cushion, and late in the half, both sides lost players to black cards, Kerry’s White and Donegal attacker Niall O’Donnell ordered from the field.

A hugely entertaining first half ended with O’Shea converting his third free for a slender 0-10 to 0-09. 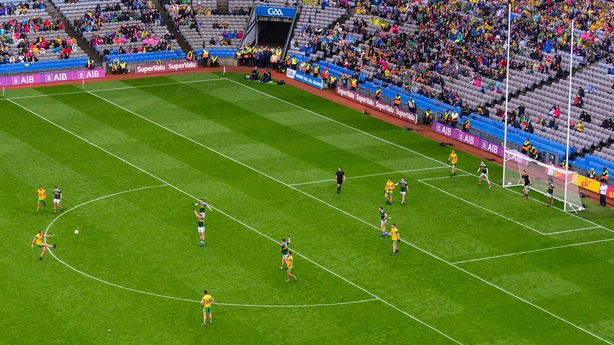 Hugh McFadden had been providing valuable protection to the Donegal defence until forced off injured early in the second half. But Murphy drove two 50 metre frees between the uprights at the Canal End to put them back in front on 42 minutes.

But three minutes later Paul Geaney exploited a mix-up in the Donegal defence to pick up a loose ball and dart through to beat 'keeper Patton with a low finish to the net.

Donegal teenager Oisin Gallen came off the bench to test the Kingdom defence with pace and trickery, hitting a delightful score and winning a free that McBrearty despatched.

And the Ulster side were awarded a penalty for O’Brien’s foul on Daire O Baoill, which Murphy drilled to the bottom corner of the net.

The intensity and pace never waned as both sides threw everything possible into the positivity of attack, with O’ Shea, O’Brien, Killian Spillane and Clifford landing memorable Kerry scores, only to be cancelled out by points from Murphy, McBrearty and Michael Langan.

Late on it was defenders Paul Murphy and Jason Foley who pressed forward to hit the points that looked to have got the Munster champions over the line, but they lost substitute Tomas O Se to a straight red card, and the game had slipped into its 76th minute when Murphy held his nerve to convert a 40 metre free. 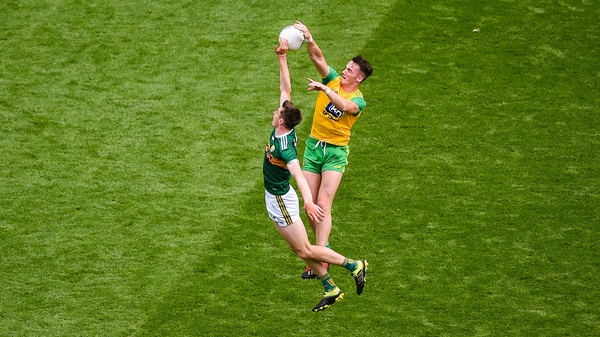