Donegal manager Declan Bonner praised the character of his team after they drew 1-20 apiece with Kerry in the Super 8s at Croke Park.

The sides were level on no fewer than 15 occasions over the course of the afternoon, with Michael Murphy's late free proving to be the final equaliser.

it means that Donegal have to go to Castlebar and avoid defeat on Saturday week to secure a place in the All-Ireland semi-finals.

"It was some match, no doubt about it," Bonner told RTÉ Sport's Evanne Ní Chuilinn afterwards.

"Both teams went at it, and I think, at the end of the day, a draw was probably a fair result.

"We had our chances, and so had Kerry, but a point means we still have to go to Castlebar in two weeks' time to get a result.

"For the neutrals out there, and probably for all the spectators, it was a great game of football.

Donegal were behind for over half an hour in the middle of the game, before a Michael Murphy free edged them back into the lead in the 42nd minute.

Kerry's response was a goal, scored by Paul Geaney, but the Tír Chonaill men had a three-pointer of their own when Murphy smashed a penalty home with 20 minutes to go.

In the end, Bonner's men had to depend on the Glenswilly man's composure to remain unbeaten in the Super 8s.

"We went toe-to-toe with a good Kerry team out there today," said Bonner.

"There were mistakes made, no doubt about that. We're still improving, there's a lot of improving to do.

"These lads are moving in the right direction, but there's a lot of work still to be done.

"They had to dig deep. They showed great character, but it's still only a point."

Here's how Group 1 is now shaping up after the second phase of Super 8s matches. #rtegaa pic.twitter.com/OPtWHEoPg4

The Ulster champions head south to play Mayo in the final game of the Super 8s knowing a draw would be enough to see them into the last four.

Bonner admitted afterwards that there was a sense of disappointment that they hadn't wrapped up their semi-final spot by winning the game.

"Those young lads will take belief from that, that they can compete with the top teams.

"But we need to move it on now. It's (the trip to Castlebar) going to be difficult." 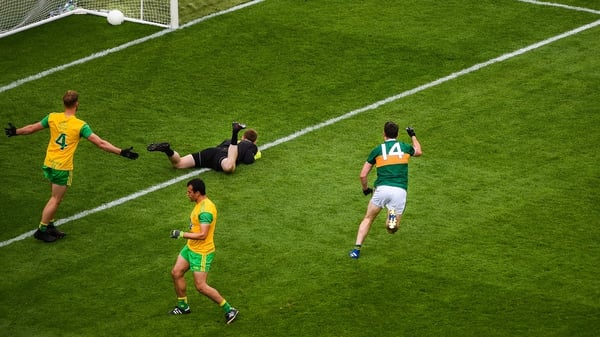