The Tír Chonaill men came into the game as Ulster champions, having beaten Fermanagh, Tyrone, and Cavan by a combined total of 15 points in the province.

Goals from Paddy McBrearty and Oisin Gallen gave Declan Bonner's side a nine point win to set them up for a top of the table clash with Kerry next week at Croke Park.

"I thought it was their toughest test," Ó Sé told Des Cahill.

"I thought Meath were very good today. I didn't expect Meath to be as close to them.

"The goal in the first-half was key. They were nip and tuck until then.

"I think in the second-half, when the game was in the balance, they outscored Meath. You had (Michael) Murphy and Ryan McHugh stepping up to the plate.

They are happy to concede because they can outscore their opponents - @JoeBrolly1993 on what's different now about Donegal #rtegaa pic.twitter.com/znOwRNZ1W1

"But in that first-half, when they were pressing them in on kick-outs, Meath were able to hang on.

"I tell you, Meath could rattle Mayo next weekend. That is a huge game."

"Anybody could rattle Mayo," concurred Joe Brolly. "It's always a lottery with Mayo."

Meath had their goals chances throughout the game, and Ó Sé says the Donegal kickout strategy is leaving them exposed.

"It's huge, the fact that Donegal are pressing up (on kick-outs).

"I remember they'd give the kick-out, they'd allow you to come into a defence sodden with men.

"Kerry going up the next day, they will be trying to go long."

Joe Brolly contrasted Donegal and Tyrone, and said that Declan Bonner changed an "established culture" in the north-west.

"He was humble enough to bring in Stephen Rochford to work on the strategy," said Brolly.

"Whereas Tyrone have lost their nerve, and they've gone back to their 2017 style of defensive football, which will wear down most teams, Donegal have decided that 'we're happy to ship some scores, because we're going going to score more than you with the way we're playing.' 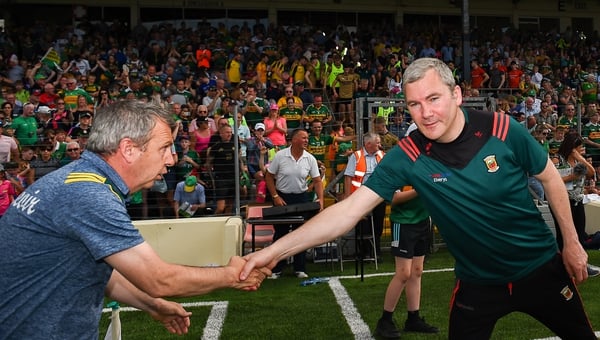 Keane is pleased while Horan admits Meath game is must-win