Kilcar star, Paddy McBrearty said he "wouldn't be happy with the finish" of his cracking goal against Meath in today’s Super 8s encounter.

In the 25th minute, Conor McGill misjudged a pass inside to McBrearty and the lethal forward collected it handily to rattle Andrew Conlon’s net, putting Donegal four points in the clear.

Patrick McBrearty with a rocket of a goal for @officialdonegal! pic.twitter.com/sc4YUtfm6K

"Listen it was probably a wee bit fortunate," he said.

"My man probably committed to the ball a bit too much and left the ball behind him. I didn’t make things easy myself I probably didn’t give myself a good enough angle. I wouldn’t be happy with the finish now but listen, they all count."

McBrearty who was out of action until Donegal’s quarter-final clash against Fermanagh earlier this summer made his 100th appearance in the green and gold jersey this afternoon.

"That went quickly. I didn’t actually know that until someone told me during the week that this was going to be my 100th game.

"Obviously a proud moment but it didn’t really change the preparation for the game. We’d a job to do today up against a good Meath side. Listen, we’re happy we got the win first of all."

The Ulster Champions were tested at home by a fearless Meath side who managed to draw level twice and even went a point up in the 53rd minute. But Donegal’s bench and experience came to the fore as they pushed on scoring 1-6 without response.

"We had all the momentum at one stage. We were five points up and I thought maybe we should have probably killed the game and we didn’t.

Declan Bonner will certainly have plenty to work on given Kerry’s emphatic win over Mayo down in Killarney this evening before next week’s round two clash at Croke Park. McBrearty said the tough test at home was ideal preparation for the mouthwatering prospect.

"We’ll have our dinner here now in Letterkenny and we’ll evaluate their game during the week." 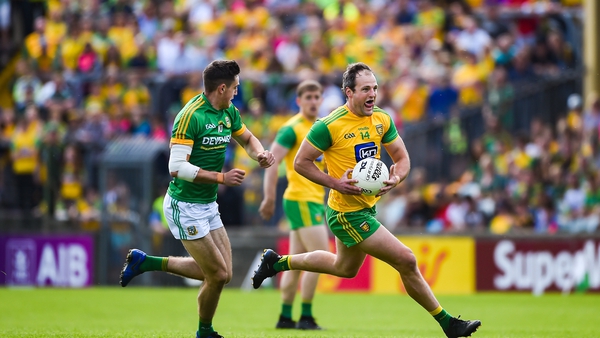 Donegal delight fans with win over Meath in Ballybofey