Donegal produced a storming finish to defeat a spirited Meath 2-19 to 1-13 in their first game in the Super 8s at Ballybofey.

Meath put it up to Donegal and it was only in the final quarter that the hosts finally put their stamp on the game in very hot conditions.

They were indebted to excellent showings from Patrick McBrearty, marking his 100th game for Donegal in style, and captain Michael Murphy, who showed true leadership when it was needed.

In front of a crowd of 15,297, Meath showed early intent with Cillian O'Sullivan pointing after just 39 seconds, the pony-tailed Meath man giving his man marker Odhran McFadden Ferry plenty of problems early on.

Donegal were in front on four minutes with points from Jamie Brennan, McBrearty and Murphy, all good individual scores. 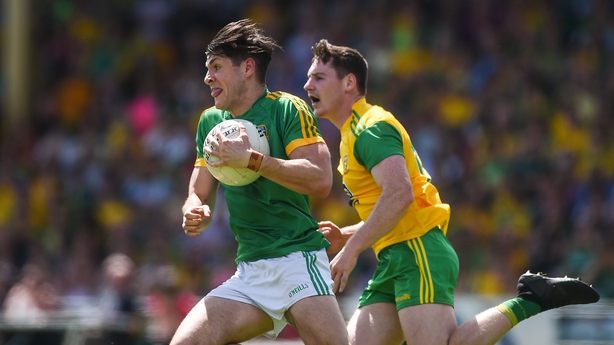 Bryan Menton replied for Meath but Jason McGee and then Jamie McBreannan pushed Donegal 0-5 to 0-2 ahead on 10 minutes.

But Meath stuck to their task with Cillian O'Sullivan and Mickey Newman cutting the deficit. Ryan McHugh and James Conlon traded scores, before Donegal struck on 25 minutes.

Ciaran Thompson went long and Conor McGill missed the bounce to give McBrearty a free run to goal and he celebrated his 100th game for Donegal with a piledriver past Andrew Colgan.

Murphy was on the end of a good Donegal move to point and Michael Langan pushed the home side five clear with time almost up. However, Bryan McMahon - from close to the sideline - had the final score of the half for the visitors.

James McEntree had a Meath point 20 seconds into the second period and they almost had a goal with an effort from Cillian O'Sullivan dropping short. James Conlon got a touch on it but the ball came back off the post.

McBrearty converted from a free and from play but just before that Gavin McCoy had the ball in the Donegal net, an effort which was disallowed for a square ball.

Meath had momentum and when Donal Keogan cut through the defence he was hauled down. Penalty. Mickey Newman converted and the lead was cut to two.

That lead was wiped out by the 48th minute as Brian McMahon and Bryan Menton struck for excellent points and Meath hit the front for the first time since the first minute when Darragh Campion fired over on 54 minutes. 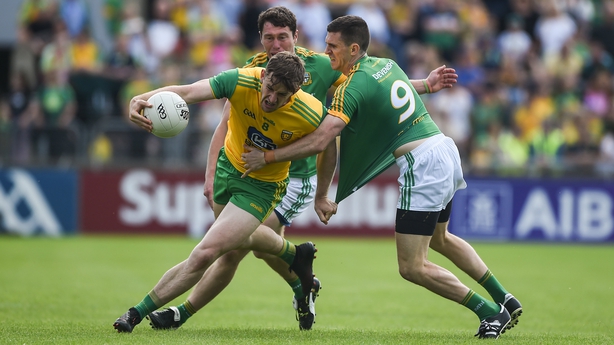 Shane Gallagher was black carded for a tackle on Eoin McHugh when he was in full flight and McBrearty got Donegal back level on 56 minutes.

Donegal went ahead again through Ryan McHugh, but almost immediately Shane McEntee fired over at the other end as the game opened up.

Declan Bonnar's men took control after that with points from Oisin Gallen and McBrearty.

Donegal were to add a point from a '45' as the game entered added time and then Frank McGlynn sent Oisin Gallen through for a second goal.

Eoin McHugh added a late point which gave the scoreline a flattering look.

It wasn't straightforward, but Donegal got the win they craved.