'It was a game of very fine margins and a few calls went against us at crucial times' - Anthony Cunningham on what might have been against Tyrone pic.twitter.com/aR8csQnTop

For Anthony Cunningham it was a case of what might have been mixed with the excitement of playing Dublin in a week's time after their opening Super 8s loss against Tyrone.

Mickey Harte's men did enough to keep the Connacht champions at bay, winning by four points at Dr Hyde Park.

In terms of goal chances, the hosts created the more clear-cut, but in the end scoring opportunities dried up for Cunningham's side.

Summing up the contest, the manager told RTÉ Sport: "Tyrone got the breaks. On another day we'd get them. You can't fault the effort of this team, everybody left their heart out there with effort.

"It was a game of very fine margins and a few calls went against us at crucial times. 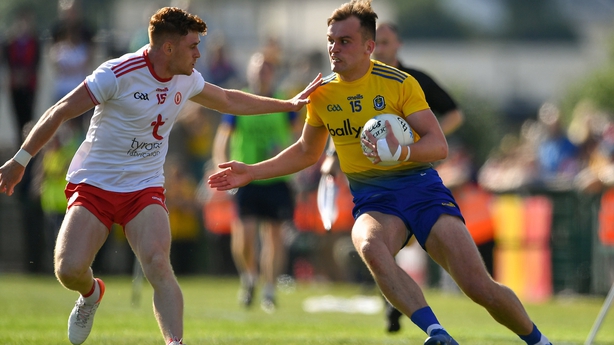 "We created two super chances for goals (Cathal Cregg and Enda Smith) and their keeper made great saves. If they had gone in and a couple of points that had gone off the upright had come back into play, well it could have been a different story.

"We didn't get the breaks in many aspects of the game."

Facing Dublin, who on Saturday evening accounted for Cork, is next up for Roscommon. It's a game that the Rossies have to get something from if they are to remain in the championship race.

"I don't think we will have difficulty in picking the lads up for next week," he added.

"It is a big challenge to play Dublin but what better challenge would you want in your football career. We are really looking forward to it.

"These guys have come on tremendously in a year. We're still in the championship and will prepare for next weekend. We want to get batter at certain aspects of our game and drive on from there."