Not many people were giving Laois a chance in the build-up to the game with Dublin, but manager Eddie Brennan says he had a "good feeling" that they were going to get a result.

Laois were never behind against the Dubs, and they reacted strongly when Oisín O'Rorke drew the sides level with just over 15 minutes to go.

And Brennan told RTÉ Sport's Ger Canning that a team meeting on Friday filled him with confidence heading into the game.

"Friday night, as a manager, you're going,' are they ready? Are they tuned into this?' Because we firmly believed that we could beat Dublin here today.

"We've had a couple of good battles with them this year. We should have beaten them in the league, and we didn't. That's what good teams will do; punish you for your mistakes.

"It's mad really. I left Portlaoise on Friday evening, and I rang Niall Corcoran and said, 'I think we're right.'

"Because up to that point, and up to that meeting after training, I wasn't sure. When I heard what they said in that meeting, I said that these boys are tuned into this.

Much had been made in the build-up about the quick turnaround expected of the Laois players after winning the Joe McDonagh Cup last weekend.

Brennan had said that Dublin had a 'huge advantage' of an extra couple of weeks of a break during the week, but it didn't show in his players performance on Sunday.

"I'm delighted for them," said Brennan afterwards. "They could have been forgiven for going through the motions this week, and saying we're going to enjoy the summer, but they really tucked into it.

"Today we were absolutely brilliant in the execution.

"As the year went on, the skill and the heart grew in them. They're the things that stand to a team when you're in a battle, and your back is to the wall.

"It was their spirit today."

Aaron Dunphy's eighth minute goal set the O'Moore Men on their way against the mis-firing Dubs. At the other end of the pitch, goalkeeper Enda Rowland made a couple of big saves.

And while Dublin looked to be building a head of steam as the game approached the hour makr, the home side never panicked, and finished strongly.

They now face a game for the third weekend in a row, as they head to Croke Park to take on beaten Munster finalists Tipperary.

"There's great resolve in the boys," according to Brennan.

"There was going to be periods where you'd take a punch or two, the opposition land them. And it's just always how you respond.

"I pushed them hard. I said, 'don't worry about making mistakes. Go make mistakes. It's what you do next is all that matters. When the tongues are hanging out today, just look around the pitch and you'll see nothing only Laois men. Just be there for each other.'

"There's a reward, and we've earned it. Look, going back to Croke Park next week, I can't wait for it." 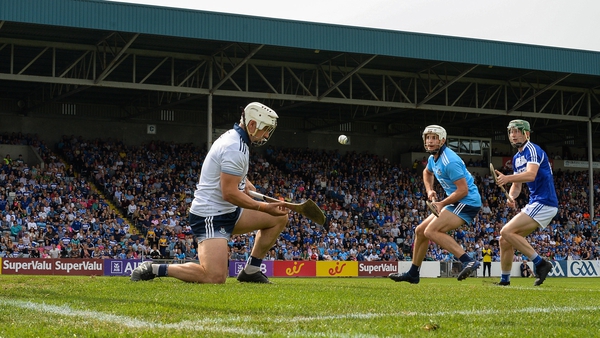