The midfield battle will be key to the outcome of Sunday's Leinster Hurling final, according to Davy Fitzgerald.

Kilkenny and Wexford meet in the decider at Croke Park, two weeks on from a thrilling draw that was enough to see the sides grab the top two places in the table and knock Galway out.

Wexford last featured in the final two years ago when they lost out to the Tribesmen, while Kilkenny fell to the same team after a replay last season. 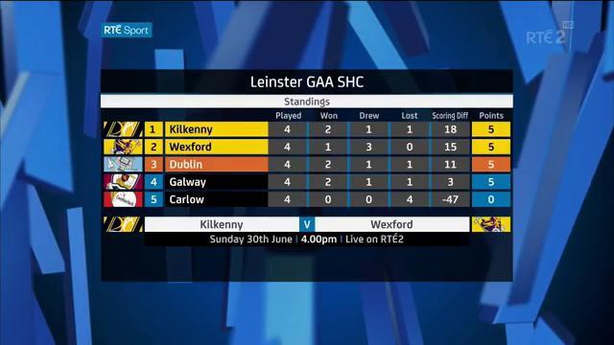 "The key battle will be the middle third," Fitzgerald, in his third season in charge, told RTÉ Sport's Marty Morrissey.

"You will have both half-forward lines coming out. That’s going to be vital.

"As we saw in Wexford Park a few weeks ago it was very physical and that middle third is going to be quite congested, I’ve a feeling.

"Whoever comes out on top there has a good chance of winning."

"It’s going to come down to what the players do on the field on the day."

Follow the Munster and Leinster hurling finals via our live blogs on RTÉ.ie/sport and the News Now app, listen to live national commentary on RTÉ Radio 1 and Raidió Na Gaeltachta. Watch live and exclusive TV coverage of Limerick v Tipperary and Kilkenny v Wexford on RTÉ2 and the RTÉ Player this Sunday.